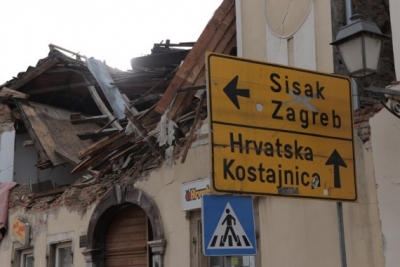 Zagreb:  Croatia has declared a state of disaster for counties that were the most affected by the devastating 6.4-magnitude earthquake that struck the country on December 29, 2020.

Addressing a government session on Monday, Prime Minister Andrej Plenkovic explained that the he decided to declare a state of disaster after receiving information from the demolished area in the past few days, reports Xinhua news agency.

“The earthquake caused enormous damage. The ground is still shaking. A large number of aftershocks have been recorded. This does not mean that we should fear, but we must be careful,” Plenkovic said.

The government’s decision was made six days after the destructive earthquake hit about 50 km southeast of the capital Zagreb, killing seven people and injuring dozens.

A state of disaster was declared for the Sisak-Moslavina County, the epicentre of the quake, and two nearby counties as well.

The Prime Minister also said that Croatia was in talks with the European Commission, trying to distribute over 100 million euros ($122 million) from the existing multi-annual financial framework into reconstruction.

The government has also formed a special headquarters to coordinate reconstruction in the quake-hit area, headed by Deputy Prime Minister Tomo Medved.

During Monday’s session, Interior Minister Davor Bozinovic said that the civil service and the army responded well, but that there is plenty of work ahead.

He noted that the Croatian Red Cross has distributed 120 tonnes of food and 150,000 litres of water.

More than 800 firefighters have been deployed to the area, and 30 people have been rescued from under the rubble.