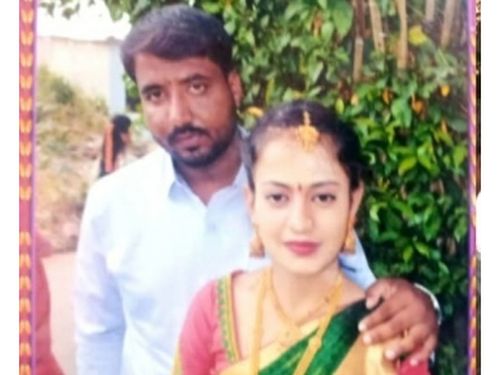 Davanagere: A man in Karnataka’s Davanagere district was arrested on Thursday for allegedly killing his 6-month pregnant wife and burying her body in the jungle – in a pit, he had prepared much earlier, police said.

The accused is identified as Mohan Kumar, 25, a resident of Gangondanahalli near Channagiri town near Davanagere. Police have launched a hunt for the parents of Mohan, who are on the run.

The deceased woman was identified as Chandrakala aka Rashmi, 21.

According to the police, the marriage of Chandrakala and Mohan Kumar was held last year. However, a dispute surfaced between the couple in the initial days. Mohan Kumar suspected Chandrakala’s character and pressured her to bring dowry. He also hated her speaking to anyone.

Whenever she spoke to others, the accused questioned her and accused her of having affairs. Police said that not being able to take the torture, Chandrakala was forced to make calls to her parents stealthily.

Though she came back to her parent’s house, they sent her back. One and half months ago, Mohan Kumar had strangulated his wife during a quarrel. Later, he took the body to the Hunaghatta forest area near Ajjampura in the Chikkamagalur district and buried it.

He then informed her parents that Chandrakala had gone missing and lodged a missing complaint with the police on October 10, saying that she had eloped with someone.

Chandrakala’s parents had complained to the police and suspected that she could have been harmed by their son-in-law. The police investigations revealed that on the day of missing, the accused had taken his car and gone outside at 2 a.m.

When the police took him into custody and grilled him, he confessed to the crime. The dead body was exhumed by authorities and sent for a post-mortem examination.

The probe revealed that the accused had planned to kill his wife one month ago. He also thought about the disposal of the body and destruction of all evidence, and even prepared the pit in the forest much earlier, police said.