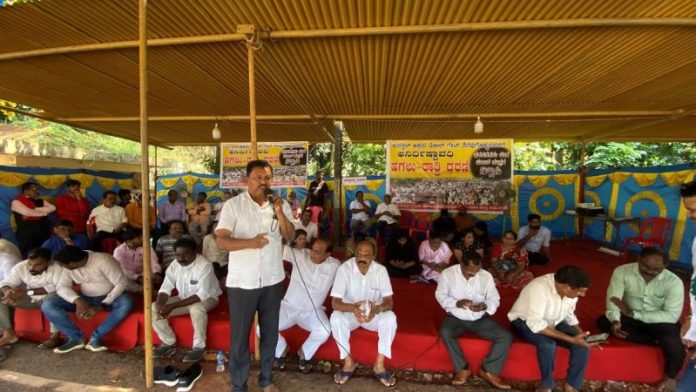 Mangaluru: Members of the Action Committee Against Surathkal Toll Gate on Friday commenced an indefinite day and night dharna demanding that the National Highways Authority of India (NHAI) vacate the toll gate. The protest began even as the city police clamped Section 144 of the CrPC within a 200-metre radius of the toll plaza at Surathkal. The protesters shouted slogans against the BJP government and people’s representatives belonging to the ruling party, including Dakshina Kannada MP Nalin Kumar Kateel. Several activists, including Former ministers B Ramanath Rai, Abhayachandra Jain, legal advisor Dinesh Ulepadi, former MLAs Mohiuddin Bava, Vinay Kumar Sorake, MLC K Harish Kumar, action committee leader M G Hegde and KPCC coordinator Prathibha Kulai are among those sat all through Friday night on the first day of the indefinite protest called by Tollgate Virodhi Samiti, Surathkal, for closure of Surathkal tollgate. 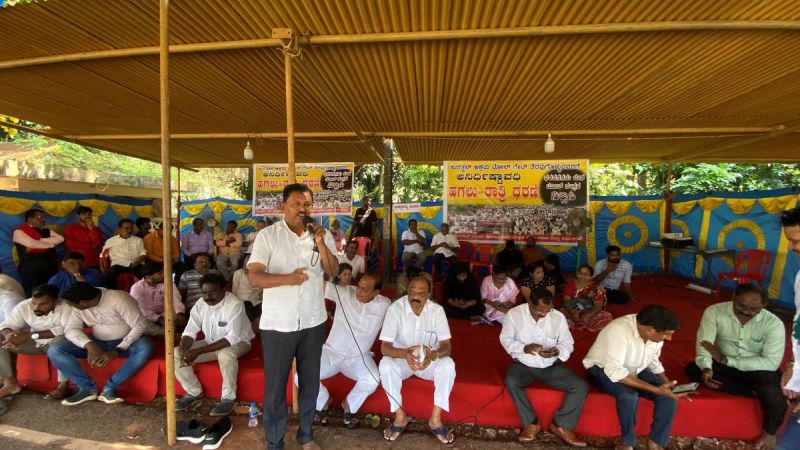 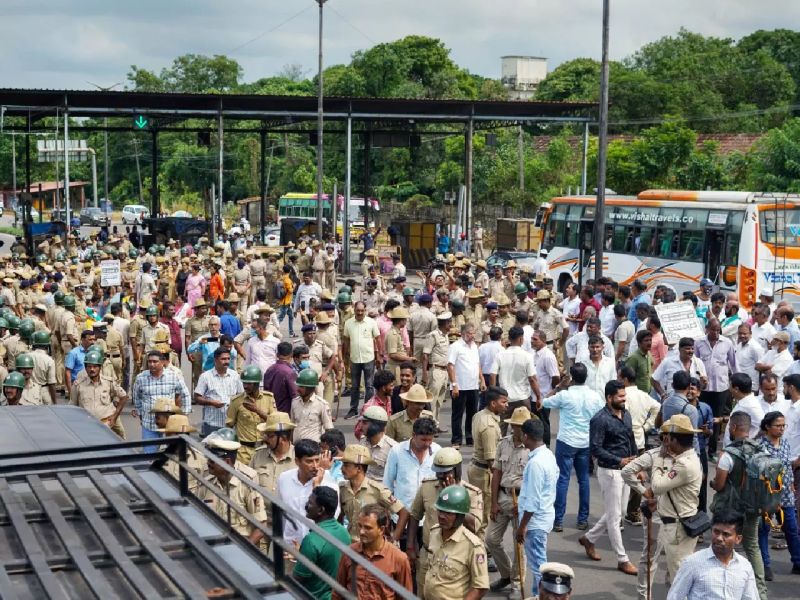 Action committee convener Muneer Katipalla said that because of continuous protests over the past seven years, the government had agreed that the Surathkal tollgate was illegal.
“The NHAI and the government have already decided to vacate the toll plaza. In the past seven years, the toll gate has collected nearly Rs 400 crore. The authorities concerned and people’s representatives have been making contradictory statements seeking more time to vacate the tollgate. As per Dakshina Kannada MP Nalin Kumar Kateel’s assurance, the tollgate should be vacated by November 9. We will continue our protest till the toll gate is vacated,” Katipalla said and demanded that the MP resign if he is not able to keep his word.

Earlier, city police commissioner N Shashi Kumar said the prohibitory order will be effective from 6 AM on October 28 till 6 PM on November 3 given the protests planned by the action committee demanding the closure of the toll gate. Dakshina Kannada deputy commissioner Dr Kumara urged the anti-toll gate action committee to put off their agitation till the government officially issues a gazette notification to scrap the toll gate as promised. National Highway Authority of India (NHAI) project director Linge Gowda also requested the protesters to wait for the government’s decision. Union Minister Nitin Gadkari has directed the authorities to remove the Surathkal toll gate and a gazette notification is pending, he said.

Reiterating that the protest will not be stopped until their demand was fulfilled, Prathibha Kulai said the peaceful protest will be continued in the interest of the common man. Lashing out at MP Nalin Kumar Kateel, she said, “People no longer trust him.” Former minister Ramanath Rai said BJP has been trying to suppress people’s voices through threats.

Earlier this month, State Minister for Energy, Kannada and Culture V Sunil Kumar said the administrative process for the removal of the toll gate at Surathkal here is in the final stages and it will be closed by the end of November. He said a detailed discussion had taken place with the Highway authorities on the issue and the approval for closure is in the final stage. On October 18, hundreds of activists protested against the toll plaza on Tuesday demanding its removal. Police detained the leaders of the action committee and removed them from the scene. For many years now, the Tollgate Virodhi Horata Samithi has been demanding the closure of the Surathkal toll gate plaza.

The NHAI had been collecting tolls from the plaza for the last six years. The action committee against the toll gate terms it as ‘illegal’ as the nearest toll gate at Hejamadi is only 10 km away, while Highway rules stipulate that no two toll plazas should function between a distance of 60 km The collection at the toll gate is continuing as usual at Surathkal plaza. A strong police force, including Karnataka state reserve police (KSRP) personnel, have been posted at the spot as a precautionary measure.