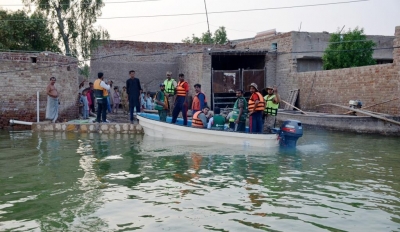 Death toll from floods in Pakistan rises to 1,731

Islamabad: The death toll from this season’s monsoon rain and floods since mid-June has risen to 1,731 along with 12,867 injuries in Pakistan, the National Disaster Management Authority (NDMA) said.

According to a report released by the NDMA on Saturday night, 645 children and 350 women were among those who lost their lives in separate rain or flood-related incidents in the South Asian country so far.

The southern Sindh province was the worst-hit region, where 792 people were killed, followed by the southwestern Balochistan province with 336 deaths, while the northwestern Khyber Pakhtunkhwa and the eastern Punjab provinces reported 308 and 223 deaths, respectively, Xinhua news agency reported.

Over 33 million people and 85 districts across Pakistan have been affected by the floods, it added.

Rescue and relief operations by the NDMA and other government organisations were underway in the flood-hit areas.