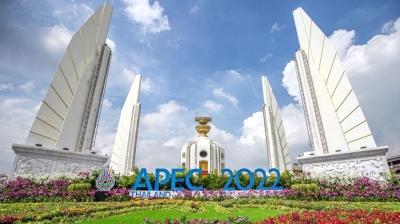 Leaders of the Asia-Pacific Economic Cooperation (APEC) bloc issued a declaration and endorsed an outcome document on Bio-Circular-Green Economy on Saturday.

Bangkok: Leaders of the Asia-Pacific Economic Cooperation (APEC) bloc issued a declaration and endorsed an outcome document on Bio-Circular-Green Economy on Saturday.

The declaration, adopted after the two-day 29th APEC Economic Leaders’ Meeting, affirmed the members’ long-standing commitment to promoting strong, balanced, secure, sustainable and inclusive growth, as well as their commitment to realising the APEC Putrajaya Vision of an open, dynamic, resilient and peaceful Asia-Pacific community by 2040, reports Xinhua news agency.

The Bangkok Goals, covering climate change mitigation, sustainable trade and investment, environmental conservation and waste management, is a comprehensive framework to further APEC’s sustainability objectives, according to an APEC statement.

The leaders will advance these goals in a bold, responsive and comprehensive manner, merging existing commitments with new aspirational ones, it said.

In the declaration, the leaders said they are determined to uphold and further strengthen the rules-based multilateral trading system.

They welcomed progress this year in advancing the Free Trade Area of the Asia-Pacific.

Thai Prime Minister Prayut Chan-o-cha told reporters that the Bangkok meeting is a common success among all APEC members, and APEC must continue to work towards building the growth and future of the region.

Also on Saturday, the Prime Minister handed over the APEC chairmanship to the US for 2023.

This year’s meeting is the first in-person gathering of the APEC economic leaders since 2018, which was held under the theme of “Open, Connect, Balance”.

APEC, established in 1989, is a premier regional economic forum with an aim to support sustainable economic growth and prosperity in the Asia-Pacific region.