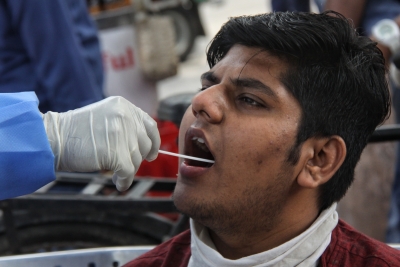 New Delhi:  The national capital reported 888 new Covid-19 cases in the last 24 hours, which is the highest single-day rise so far, the health bulletin released by the Delhi government on Monday said.

According to health bulletin, seven deaths were reported in last 24 hours and as many as 67,418 tests were conducted.

The positivity rate was reported to be 1.32 per cent on Monday, as compare to 1.03 per cent on Sunday.

The cumulative positivity rate went up to 4.67 per cent against 4.69 per cent on Sunday. As per the bulletin, a total of 565 patients were recovered or discharged on Monday.

Meanwhile, Monday saw increased activity on the vaccination front, being the first day when the vaccination sites at Delhi government hospitals worked for at least 12 hours (9 a.m. to 9 p.m.) against the earlier period of 9 a.m. to 5 p.m.