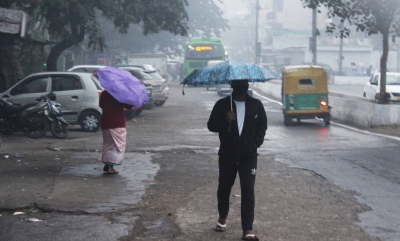 Delhi residents wake up to rain on chilly Sunday morning

In the past 24 hours, Delhi has recorded 2.4 mm rainfall. The Met Department predicted that parts of National Capital Region, including Delhi, are likely to get more rain and thundershowers.

“A cloud patch has almost crossed the Delhi region. However, another patch is approaching the Delhi area from north-east Rajasthan and south-east Haryana, which most likely will lead to moderate to intense rain over parts of Delhi and neighbouring areas during the next 2-3 hours,” said the India Meteorological Department (IMD).

The minimum temperature in the last 24 hours was recorded at 5.30 am in Delhi’s Palam at 3.2 degrees Celsius and two degrees at Safdarjung.

On Saturday also, the NCR received light rain accompanied by thunderstorms at various places. Some areas in Haryana, Uttar Pradesh, and Rajasthan also got rain.