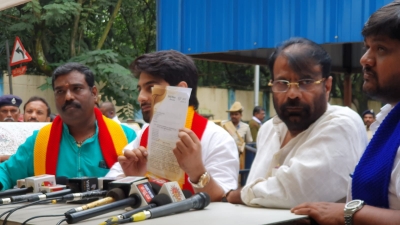 Bengaluru: A group of Kannada activists led by sandalwood actor Zaid Khan on Saturday presented a memorandum to Chief Minister Basavaraj Bommai demanding singing of the state anthem in theatres and multiplexes across the state.

Zaid Khan, the son of Congress MLA from Chamrajpet B.Z. Zameer Ahmed Khan, in his memorandum has urged the government to make the state anthem mandatory alongside the national anthem.

“We must recite the national anthem and state anthem with pride while singing. We must inculcate the habit of reciting the state anthem for the present and future generations to come,” he said.

Zaid appealed to the Chief Minister Bommai to ensure recitation of the state anthem in future in all theatres alongside the national anthem. The chief minister has assured Zaid Khan to hold discussion with sandalwood fraternity and do the needful.

While presenting memorandum, representatives of various Kannada organisations and members of Dalit organisations were present with Khan.