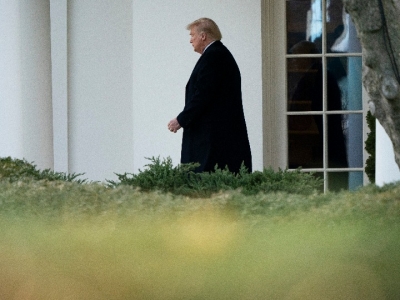 New York: Democrats launched on Monday a two-pronged attack on US President Donald Trump to remove him from office by starting the process of impeachment and by introducing a resolution in the House of Representatives demanding that Vice President Mike Pence oust him by exercising his Constitutional authority.

Republicans blocked a resolution demanding that Pence and the cabinet remove Trump from office and the Democrats responded by introducing the article of impeachment against the President for his alleged role in the storming of Congress by his supporters last week that left a police officer and four others dead.

“The President’s threat to America is urgent, and so too will be our action,” Speaker Nancy Pelosi said on Monday.

Pelosi had given Pence a 24-hour ultimatum on Sunday to act on the Constitution’s 25th Amendment that empowers him and a majority of the cabinet to remove Trump by declaring him “unable to discharge the powers and duties of his office”.

At the brief session of the House of Representatives on Monday, the resolution needed to be accepted unanimously but a Republican objected necessitating a formal vote, which could take place as early as Tuesday.

Meanwhile, acting on the ultimatum, Democrats retaliated by introducing an article of impeachment charging Trump with “inciting violence against the government of the United States” through his actions mobilising his supporters against the election of Joe Biden as President and Kamala Harris as Vice President and asking them to go to Congress.

The move to impeach Trump has the support of more than 218 Democrat members of the 435-member House ensure its passage.

This will be the second impeachment of Trump. The last one 2019 failed because the Republican-controlled Senate refused to convict him.

There is a sense of urgency to act because Trump’s term is ending in nine days and the leader of the Democratic Party majority in the House, Steny Hoyer, said a vote may be possible on Wednesday.

He explained the dual track action of pursuing the 25th Amendment and impeachment: “Because the timeframe is so short and the need is so immediate and an emergency, we will also proceed on a parallel path.”

He dismissed concerns about timing of impeachment, “Whether impeachment can pass the United States Senate is not the issue.”

Biden has declared Trump unfit to continue as president, but has not called for impeaching him citing the tight timeframe.

If there were six months left “we should be doing everything to get him out of office (like) impeaching him again, trying to evoke the 25th Amendment”, but now, he said, he was focused on getting “our agenda moving as quickly as we can”.

An impeachment is only the framing of charges of by the House — which can be rushed through by the Democrat-controlled body — but Trump will have to be put on trial before the Senate in a judicial-style procedure with the Senators acting as jurors.

One of the reasons Biden does not endorse an impeachment is because he will have to get his cabinet members approved by the Senate quickly and if when it reconvenes on January 19, it is caught up in holding the trial after the impeachment, the confirmation of his nominees will be held up.

Democratic Party’s whip in the House, James Clyburn, left the timeline open while speaking during a CNN programme on Sunday. He said the impeachment could take place at a later date after giving Biden time to get his administration off the ground.

But now it appears that Democrats will continue with the impeachment.

Pence and the cabinet have shown no public interest in invoking the 25th Amendment.

Two others, Secretary of State Mike Pompeo and Treasury Secretary Steven Mnuchin, were reported to have discussed invoking the 25th Amendment.

The attack on the Capitol building took place while Congress was in session considering the ratification of the electoral college votes electing Biden as President and Kamala Harris as Vice President.

Trump, who has claimed that their election was invalid because there was massive fraud, told a rally of his supporters before the Congress session began to go there.

A section of his supporters stormed the Capital and invaded the Senate chamber and the offices of the speaker and others, bring the session to a halt and evacuating the legislators to safe places.

Undeterred, Congress met later and put its seal on the election of Biden and Harris.