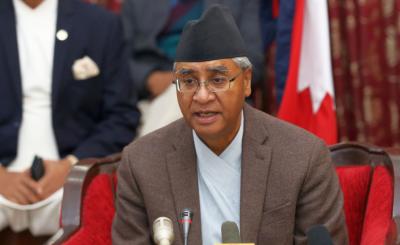 The development came a day after the Supreme Court overturned former Prime Minister K.P. Sharma Oli’s decision to dissolve Parliament and directed Bhandari to appoint Deuba as the Prime Minister.

Already appointed as the Prime Minister four times previously, Deuba, 69, will now take charge of the Himalayan nation for the fifth time.

In an address to the nation on Tuesday, Oli said that he will abide by the Supreme Court verdict and is going to vacate the post, but he has refused to resign.

“I have left the post and I am not worried too because I have worked for the sake of Nepali people,” Oli said while also lambasting the Supreme Court’s verdict that “has overthrown him”.

Oli further claimed that the apex court has crossed its jurisdiction and decided over political matters.

Monday’s verdict of the Supreme Court’s constitutional bench “will have a long-term and negative impact on the multiparty parliamentary system”, he alleged.

Stating that he and his party will implement the order of the court, Oli insisted that it is sure to demolish the party system and multi-party democracy.

“The terms and language used in the verdict has alarmed all those who believe in a multi-party system. The order has violated the system of check and balance (of power between state organs).

“This is just a temporary joy. It’ll have a long-term impact,” Oli added.

Oli, who was appointed Prime Minister in February 2018, almost enjoyed a two-third majority but due to his high-handedness and poor-working style, he was criticised by his own party leaders.

This decision not only divided the two communist parties, but also put Oli in a minority.

The Maoist Center withdrew the support extended to Oli in May.

After the Maoists withdrew their support, Oli as per a constitutional provision went for floor test.

He failed to win the vote of confidence after which he dissolved the House on May 21 and declared the early elections in November.

This step was challenged in the court.

Simultaneously Deuba also claimed his majority and filed a petition at the Supreme Court seeking his appointment as next Prime Minister as he enjoys the support of majority lawmakers.

Hearing Deuba’s petition, the Supreme Court on Monday issued a mandamus to the President Office to appoint him within Tuesday evening and restore the House.

Deuba, who is expected to form a small cabinet on Tuesday , is taking oath of office in secrecy later in the evening.