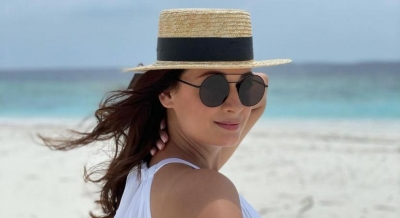 “Pause to stop and think before we share online. During the pandemic fake news and misinformation has polarized us, cost lives and disrupted health efforts – and now it’s prolonging the pandemic. If you believe in truth then join me, post the symbol and #PledgetoPause,” Dia tweeted.

The actress’ tweet comes at a time when fake news and random forwards on social networking apps often misguide people amid the ongoing Covid-19 pandemic.

Meanwhile, the actress who tied the knot with Mumbai-based businessman Vaibhav Rekhi in February this year, is expecting her first child.

Dia announced her pregnancy with an Instagram post in April this year, sharing a photo of her baby bump.

“Blessed to be… One with Mother Earth… One with the Life Force that is the beginning of everything… Of all stories. Lullabies. Songs. Of new saplings. And the blossoming of hope. Blessed to cradle this purest of all dreams in my womb,” Dia wrote along with her photograph.