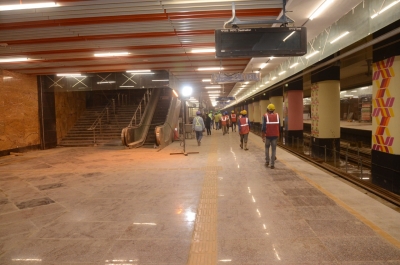 New Delhi: Delhi Metro network has built its first ever underground integrated parking facility where vehicle users will be able to park their cars and two-wheelers and then proceed to the concourse of the station directly using lifts and escalators.

The facility, which will have a parking space for about 110 cars and 185 two-wheelers, is available on DMRC’s Grey Line of Dhansa Bus Stand Metro station situated on the Dwarka-Najafgarh-Dhansa bus stand corridor. The entire underground floor here is dedicated for parking of vehicles. The parking facility will be integrated with the main station area.

The station has been designed as a four-level underground structure where there will be the platform at the bottom (at an approximate depth of 18 metres) followed by the concourse and then an entire floor for parking above it with the roof level at the top (ground level).

The parking lot is equipped with facilities such as the entry and exit ramps, lifts, staircases and escalators.

“There would be provision for property development activities at the ground level in the future.

There will be one lift at the centre of the parking lot for passengers. In addition, there will be two staircases and two escalators each which will connect the facility directly with the unpaid area of the concourse below,” said Anuj Dayal, Executive Director (Corporate Communications), DMRC.

During the office hours when the passengers are in a hurry to board the train as early as possible, the location of the parking lot in such a close vicinity to the concourse will be a major benefit, said Dayal, adding “this parking facility can be considered a major design-based improvement since no other underground Metro station in Delhi Metro’s network has any such facility”.

Currently, the Hindon River Metro station on the Dilshad Garden-Shaheed Sthal New Bus Adda corridor has a basement parking facility though it is an elevated station. The New Delhi station of the Airport Line has a multi-level parking lot above the station.

The parking facility will be of great benefit to the local residents as the adjoining areas are extremely congested with very limited space for parking of vehicles. The parking space will have ramps on two sides for entry and exit of vehicles.

There will be two entry and exit facilities which will connect the parking lot both with the surface above and the platform below.

The Delhi Metro currently operates parking lots in about 100 Metro stations across the network.

Work on the 1.8 kilometre long Najafgarh-Dhansa bus stand section is now almost complete. With the completion of this section, the Dwarka-Dhansa bus stand Grey Line corridor will become 6.1 kilometres long with four stations.

This extension will immensely benefit the residents of the interior areas around Najafgarh. All efforts are being made to open the Najafgarh-Dhansa Bus Stand section sometime later this month after complying with all statutory requirements.