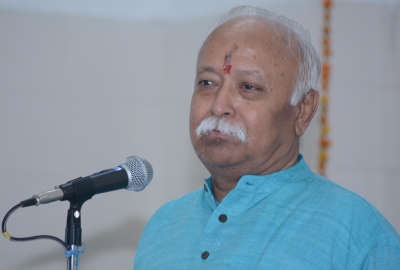 ‘DNA of all Indians is same, irrespective of religion’: Mohan Bhagwat

New Delhi: RSS chief Mohan Bhagwat on Sunday said that the DNA of all Indians is the same, irrespective of religion, even as he condemned lynching.

“We are one on the basis of our motherland. So there is no need to fight here. We are all descendants of common ancestors. All of us Indians have the same DNA. Whatever may be our religion,” Bhagwat said.

Bhagwat said that the Sangh does not believe in the politics of votes. “We are in favour of the nation. We support those who are in favour of it. The work of connecting people cannot be done by politics. Politics is not a tool for this work, but is rather a weapon of destruction.”

He was speaking at a function in Ghaziabad organised by the Muslim Rashtriya Manch on the theme ‘Hindustani First, Hindustan First’ for the release of a book titled – ‘The Meeting of Minds: A Bridging Initiative’ – written by Khwaja Iftikhar Ahmed. The book is available in Hindi, Urdu and English.

The RSS chief said, “Hindu-Muslim unity is misleading as they both are not different, but one. DNA of all Indians is the same, irrespective of religion.”

He urged the Muslims not to get trapped in the cycle of fear that Islam is in danger in India.

“Don’t get trapped in the cycle of fear that Islam is in danger in India,” he said.

He said all those involved in lynching are against Hindutava, Bhagwat said, “If a Hindu says that no Muslim should live here, then that person is not Hindu. The cow is a holy animal but the people who are lynching others are going against Hindutva. The law should take its own course against them without any partiality.”

Emphasising that development is not possible without unity, Bhagwat pointed out that the basis of unity should be nationalism. “The only solution to Hindu-Muslim conflict is dialogue, not discord. We are in a democracy. There can’t be a dominance of Hindus or Muslims. There can only be the dominance of Indians,” he said.

He mentioned that the RSS keeps working to strengthen the nation and for the welfare of all in society. He once again said that the RSS is not a political organisation.