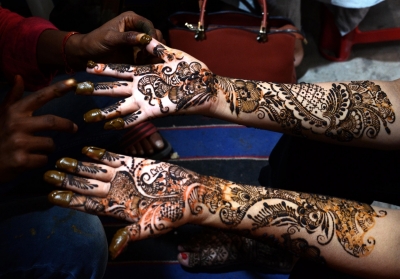 Muzaffarnagar: The Hindu Mahasabha has warned of serious consequences if any non-Hindu youth is found applying ‘mehendi’ on the hands of Hindu women.

Hindu women apply mehendi on their hands before the Karwa Chauth puja which will be held on Thursday night.

Vikram Saini, a BJP MLA from Khatauli, said the intensions of Muslim youth who have opened mehendi shops are “different” and they have “love jihad” on their minds.

“They conduct love jihad under the guise of this mehendi work. There have been many such cases. My request to Hindu women is to apply mehendi at home or from shops and beauty parlours opened by our community members,” Saini said on Thursday.

Meanwhile, the Vishwa Hindu Parishad (VHP) has opened 13 mehendi stalls and tasked its members with ensuring that Muslim male make-up artists do not apply mehendi or henna to Hindu women. They are verifying the details of the mehendi artists by checking their Aadhar cards.

Lokesh Saini, a Hindu Mahasabha member, said the move is to protect “our brothers and sisters” from falling prey to “love jihad”.

Hindu women should go to those stall owners who understand the significance of Karwa Chauth, he said.