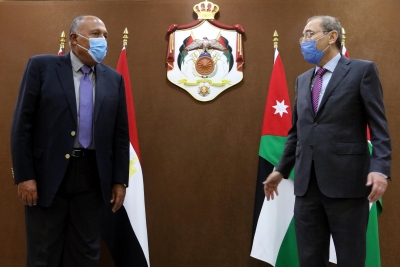 Cairo:  Egyptian Foreign Minister Sameh Shoukry and his Jordanian counterpart Ayman Safadi discussed efforts to resume the stalled Israeli-Palestinian peace process ahead of a quartet meeting on the issue.

During a meeting in Cairo on Sunday, the two top diplomats focused on the ways to support the Palestinian cause, Xinhua news agency quoted the Egyptian Foreign Ministry as saying in a statement.

Shoukry briefed his Jordanian counterpart on the results of Egypt’s recent contacts with the various parties concerned with the Palestinian issue, it said.

He also introduced the ongoing preparations for the next meeting of the quartet group comprising Egypt, Jordan, France and Germany, that will take place in Cairo on Monday, with the aim of restarting the stalled Palestinian-Israeli peace negotiations, the statement added.

The quartet meeting is meant to urge the Palestinian and Israeli sides to negotiate in order to reach a just and comprehensive political settlement based on the two-state solution that ensures the establishment of an independent and sovereign Palestinian state on the 1967 borders, with East Jerusalem as its capital.

The Israeli-Palestinian peace process has stalled since 2014, after rounds of US-sponsored talks failed to produce a breakthrough.

Palestine has cut off ties with the US government under President Donald Trump, who recognized the disputed holy city of Jerusalem as Israeli capital in 2017, and relocated the American embassy in Israel to the city in May 2018.