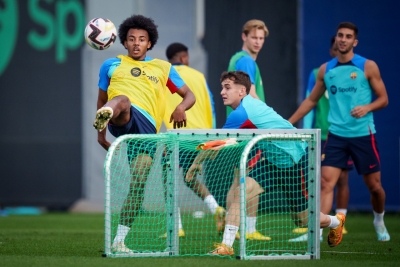 El Clasico the big game, but plenty more in La Liga this weekend

Madrid: The ‘Clasico’ between Real Madrid and FC Barcelona will capture most of the headlines this weekend in Spain as the top two sides in La Liga renew their eternal rivalry.

Ronald Araujo, Andreas Christensen and Hector Bellerin are all out for Barcelona, and the absences in central defense are what will most worry Xavi Hernandez against a Real Madrid side that has already ensured its place in the last 16 of the UEFA Champions League.

Players such as Vinicius Jr, Rodrygo and Federico Valverde will look to cause Barca problems on the break, and Real Madrid boss Carlo Ancelotti’s only worry ahead of the match is whether or not goalkeeper Thibaut Courtois can shake off a back problem, reports XInhua.

Although it is sometimes hard to believe, the Clasico is not the only game in Spain this weekend, which starts with Rayo Vallecano at home to Getafe in a south Madrid derby on Friday night.

Girona entertain Cadiz in the first game on Saturday in which the visitors’ improved defense is likely to be tested by Girona’s exuberant attacking football.

Valencia can expect to continue their impressive home record at home to bottom side Elche, who are without a win all season, but did take a draw at home to Mallorca on Monday night.

Elche named Jorge Almiron as their new coach on Wednesday, two years after sacking him following a run of 16 games without a win.

Mallorca are at home to Sevilla, who look to be improving under coach Jorge Sampaoli, but who also have a vital Champions League game at home to Copenhagen next week.

Athletic showed in Sevilla last weekend that their early season form is no flash in the pan, and they have had all week to prepare to face a rival whose European future hangs by a thread, after a draining 0-0 draw at home to Club Brugge on Tuesday, and ahead of a vital match at home to Bayer Leverkusen next Tuesday.

Athletic will look to keep the tempo as high as possible in a San Mames stadium that will be packed to the rafters.

Celta Vigo and Real Sociedad should offer an entertaining warm up for the Clasico, with both sides producing entertaining, attacking football.

Depending on results elsewhere, Espanyol could kick off their home game against Valladolid in the relegation zone. Espanyol have relied on former Alaves striker Joselu for their goals this season, but their big problem has been in goal, where neither Alvaro Fernandez or Benjamin Lecomte have looked anywhere near convincing.

Real Betis face Almeria in an Andalusia derby, where Betis’ home form should be decisive, while the round of matches ends on Monday as Villarreal look for form at home to Osasuna, who travel to the east coast after a defeat at home to Valencia.