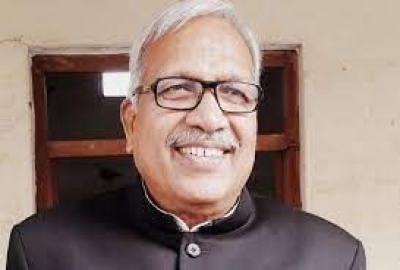 Ballia (Uttar Pradesh): Former Minister Ambika Chaudhary and his son, Anand Chaudhary, have been booked under the POCSO Act for allegedly shouting ‘indecent slogans’ against state sports minister Upendra Tiwari and his family.

Upendra Tiwari’s family had demanded that the accused should be booked under the POCSO Act as the slogans targeted his two minor daughters along with his mother.

Upendra Tiwari has alleged that the SP workers had abused his mother and daughters.

“In the video, expletives were hurled at my mother and daughters after the panchayat results. Ambika Chaudhary is trying to join the SP through his son. In 75 districts of the state, elections for the zila panchayat chairpersons were held, but this situation did not come up in the 74 other districts,” the minister said.

The BJP leaders in Ballia met the Superintendent of Police Vipin Tada, demanding action in the matter.

Additional Superintendent of Police (ASP) Sanjay Yadav said that Anand Chaudhary, his father Ambika Chaudhary and hundreds of unidentified people were booked by the police.

Ambika Chaudhary has been a minister in all Samajwadi Party governments and is one of the founder members of the party. He left the SP to join the Bahujan Samaj Party (BSP) after the family feud in the SP worsened in 2017.

Last month, Chaudhary resigned from the BSP and his son was given a ticket for the zila panchayat elections. He is likely to formally join the SP soon.