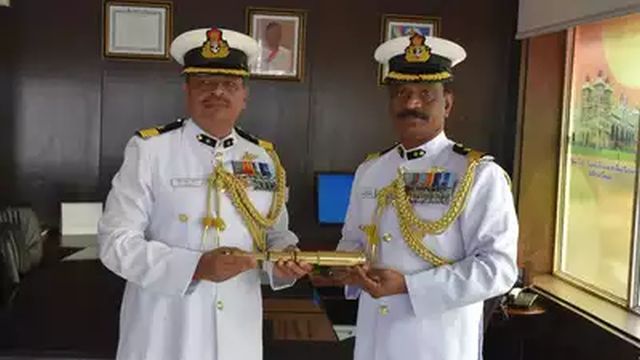 Exit Venkatesh, Enter Mishra! DIG Praveen Kumar Mishra is New Karnataka Coast Guard Commander at the Kar CG headquarters based at Panambur Port, Mangaluru – He took over the charge from DIG S B Venkatesh, who was transferred to Vizag

Mangaluru: Deputy Inspector General Praveen Kumar Mishra, of the 1990 batch, assumed the charge of headquarters, Coast Guard District No. 3, Karnataka, based at Panambur Port, Mangaluru on Monday 10 October 2022 He took charge from DIG SB Venkatesh who was transferred to Vizag.

In his address, DIG Mishra said, “I will have priorities in making the Karnataka coast safe for fishing, shipping and recreational activities. I will emphasize increasing the presence at sea so that seafarers feel safe while pursuing their economic activities. Together we will develop infrastructure for future Coast Guard operational requirements which will boost the safety of mariners on the Coast of Karnataka.”

DIG PK Mishra has held various appointments both shore and afloat. During his three decades of career, he has commanded various classes of ships which include pollution control vessels, offshore patrol vessels, fast patrol vessels, hovercraft and interceptor boats. He commanded the Coast Guard station Beypore and as the commanding officer of CGS Delhi, was chief staff officer (operations) at HQCGC on the Eastern seaboard. He has also held the post of Officer-in-charge of Coast Guard Training Centre, Coast Guard Store Depot, Kochi, Director Logistics GCHQ New Delhi and was holding the post of project officer Coast Guard Academy project before taking over the Command of Head Quarter No 3.

DIG Mishra is a recipient of the prestigious Tatrakshak Medal (Gallantry) in 2001 for saving 86 lives during a single operation conducted in the Bay of Bengal and was also instrumental in rescuing 21 mariners from the sinking ship MV Luknam the same year.