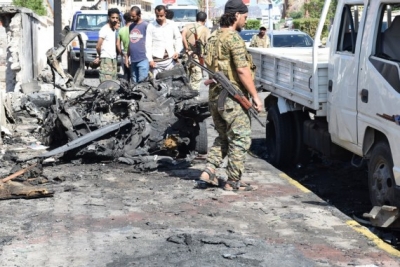 Aden: An explosion struck an ambulance carrying a medic team of the southern pro-government Yemeni forces in southern Abyan province, killing five medics on board.

“A remotely detonated Improvised Explosive Device (IED) struck an ambulance carrying a medical military team of the southern troops while passing through a main road in the Al Mahfid district of Abyan,” a security official told Xinhua news agency on condition of anonymity, adding the blast also destroyed the ambulance.

Homemade bombs were heavily laid by terrorist elements through various roads and areas in an attempt to impede and abort the progress of the pro-government military campaign aimed at tracking down terrorists in Abyan, he noted.

No group has claimed responsibility for bombing the military medical team yet. Yemeni military and government officials often hold the Yemen-based al-Qaida branch responsible for such attacks.

In September, forces loyal to the Yemeni government evicted scores of al-Qaida militants from Abyan following days of armed confrontations.

The Yemen-based al-Qaida in the Arabian Peninsula network has exploited years of deadly conflict between the Yemeni government and Houthi militia to expand its presence in the war-ravaged Arab country. It has carried out many high-profile attacks against the security forces in the country’s southern provinces.