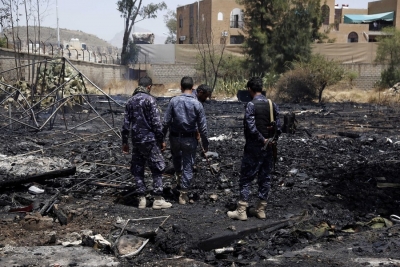 On Monday night, the blasts rocked the warehouse near a densely populated neighbourhood, “igniting fires and forcing the evacuation of several families living in the area”, the official told Xinhua news agency.

He accused the Houthi rebels of striking the weapons warehouse that belonged to the third Regional Military Command of the Saudi-backed Yemeni government forces in Marib.

Preliminary investigation revealed that the explosions caused a number of injuries and deaths, he said, without providing the exact number of casualties.

Local witnesses said ambulances rushed to the scene to take the casualties to the nearby government-controlled public hospitals.

So far, the Houthi rebels have not claimed responsibility for the explosions.

Since a national ceasefire failed to be renewed on October 2, an increase in the number of Houthi attacks against government forces across Yemen has raised concerns about potential major confrontations.

Yemen has been mired in a civil war since late 2014 when the Iran-backed Houthi group stormed several northern cities and forced the government out of the capital Sanaa.

The war has killed tens of thousands of people, displaced 4 million, and pushed the country to the brink of starvation.