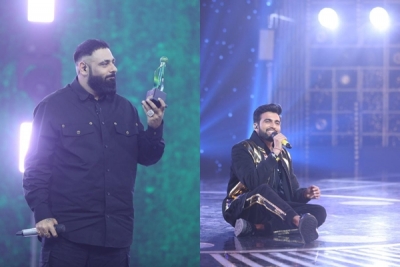 After a tough competition among five finalists, Faridabad’s Abhishek Baisla, better known by his stage name MC Square, has been declared winner of “Hustle 2.0”. He bagged a trophy and took home a cheque of Rs 10 lakh.

Mumbai: After a tough competition among five finalists, Faridabad’s Abhishek Baisla, better known by his stage name MC Square, has been declared winner of “Hustle 2.0”. He bagged a trophy and took home a cheque of Rs 10 lakh.

Tanishq Singh from Delhi was declared first runner-up and Mumbai’s Nihar Hodawadekar is the second runner-up.

Judge Badshah, together with the Squad Bosses — Dee MC, EPR, Dino James and King — joined rapper Ikka Singh to give entertaining performances on some of the famous dance numbers.

Ikka of “Trap Munde” fame shared his happiness after seeing Badshah’s performance. “He is indeed the rap supremo of India. I just love it whenever I see him on stage,” he said.

“It was my childhood dream of becoming a star and now I can proudly tell my mother that her son is indeed one,” MC Squre said.

“The love and support from Badshah Sir and my co-contestants kept motivating me — it all added up. I dedicate this win to the entire rap community. Hip-Hop for life,” he added.

Talking about MC Square’s victory, Badshah said: “Our talented contestants have amazed me week-on-week with their storytelling and skills. Abhishek has undoubtedly proven to be the next rap voice that the Indian hip-hop community was looking for and I couldn’t be happier for him.”

Squad boss Santhanam Srinivasan, popular by his stage name EPR, added: “I’m elated at MC Square’s win! Not just because he belongs to my Squad, but also because of his humble demeanour that defies the popular ‘rapper’ persona and continues to inspire everyone, including me.”

EPR, the Season One winner, said he was proud to pass on the baton to MC Square. “He is an OG hustler with unique storytelling prowess. I feel like my unfinished story of Season One has finally found a fitting epilogue with his win,” EPR said.