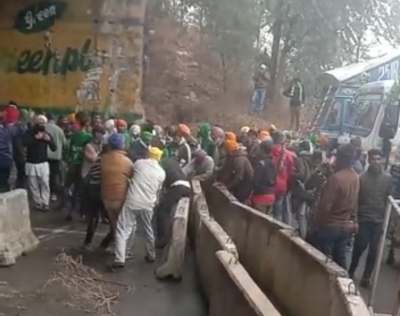 Farmers may enter Gurugram in next few days

ArrayGurugram: Three days after a group of farmers protesting against the new farm laws broke through barricades at the Harayana-Rajasthan border and entered Rewari district in Haryana, a group of agitating farmers probably from Sri Ganganagar in Rajasthan made another attempt to move towards the national Capital on Sunday evening.

This led to a clash with police near Sanghwadi village in Rewari, around 17 km away from Gurugram.

The Haryana Police attempted to stop them using water cannons and tear gas even as the farmers’ leaders urged them not go towards the national capital.

According to police, “around 50 tractors” had tried break through the barricades around 6.30 p.m. but were stopped.

“We did not resort to any baton charge to stop them from breaking through, but we had to use water cannons and tear gas shells to stop them,” the police said.

However, it is expected that the farmers may enter Gurugram in next few days.

In view of such attempts the Gurugram police have beefed up their security across the Gurugram-Rewari border and a huge police force have been deployed to stop farmers entering Gurugram.

“A number of police personnel including additional force along with Rapid Action Force with anti-riot equipment have been deployed at the Gurugram-Rewari border to stop farmers entering Gurugram. As of now no farmers groups have entered in Gurugram,” said Astha Modi, DCP (headquarters).

However, in Rewari the police have managed to stop the farmers near Sanghwadi village in Rewari.

Farmers from Rajasthan and Haryana have been protesting against the three farm bills on the Delhi-Jaipur since December 13. The numbers have been increased from barely 200 to around 2,000 now after Gujarat, Maharashtra and South Haryana farmers joined them.