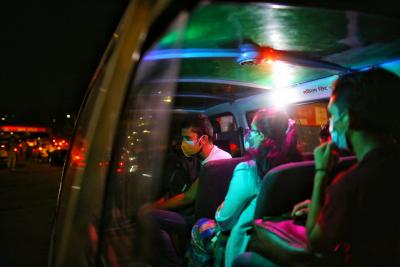 Kathmandu:  Nepal health officials and experts have warned of a further spread of the novel coronavirus as protests have erupted across the Himalayan nation after the House of Representatives or the lower house of parliament was dissolved last week, leading to an ongoing political crisis.

President Bidya Devi Bhandari dissolved the House on December 20 and announced the date of new parliamentary elections for April 30 and May 10 as per the recommendation of the cabinet amid the political infighting within the ruling Nepal Communist Party, reports Xinhua news agency.

With legal challenges being made at the Supreme Court against the dissolution claiming the move unconstitutional, it will check the constitutionality of the move.

If the court okays the dissolution, the Himalayan country will move towards new polls after more than three years since the last elections held in 2017.

Since the development, there have been protests in various parts of the country, particularly in capital Kathmandu, also the epicentre of the coronavirus pandemic.

Sameer Kumar Adhikari, joint spokesperson at the Nepal’s Ministry of Health and Population told Xinhua that the protests and the election campaigns could lead to massive spread of coronavirus.

“We have been continuously conveying a message against mass gathering. But, political issues are not something that we can control” he said.

“Either in protests or in mass mobilization for the elections, there is a risk of mass spread of coronavirus,” Baburam Marasini, former director of the Epidemiology and Disease Control Division under the Department of Health Services, told Xinhua on Saturday.

He also expressed fear that the politics could take priority over controlling the pandemic both at the level of the government and the political parties making the fight against the pandemic more difficult.

“If the elections are held in April and May, the Nepali government needs to spend big for holding the elections which will reduce resources to be spent for controlling the pandemic such as purchasing the Covid-19 vaccines,” said Marasini.

Sagar Rajbhandari, director at the Kathmandu-based Sukraraj Tropical and Infectious Disease Hospital which was converted as the first Covid-19 hospital in Nepal, told Xinhua that he feared upward momentum in new cases along with mass gatherings although the cases have been decreasing in the recent weeks.

As many as 500 new cases were reported on Saturday although the Himalayan country had once reported over 5,000 cases in a single day.