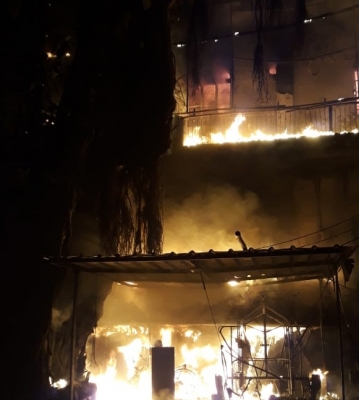 The fire broke out at around 1.36 a.m. It took over four hours to bring the inferno under control.

On the third floor of the building, there is a night club and the terrace is being used for a restaurant. The night club ‘Markaz’ does not have an NOC from the Fire Department.

“The fire apparently broke out in the first and second floor. Plastic materials, auto glasses, wind gasses storage area were affected by the blaze. Some portion of the ground floor and basement was also affected by the fire.

“The basement was being used for the storage of plastic materials,” said Atul Garg, Director Delhi Fire Service.

A total of 25 fire tenders were rushed to the site. The fire was brought under control around 5.50 a.m. Four persons all in their early twenties, including a women have been rescued, the Fire Department said.