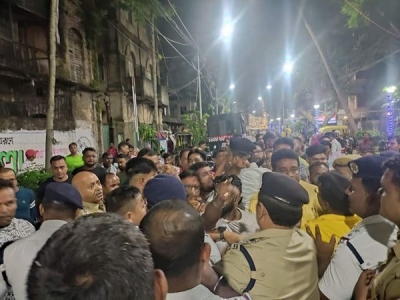 Fire breaks out at Ramlila pandal in UP’s Etawah

Etawah: A day after the fire at a puja pandal in Uttar Pradesh’s Bhadohi, a major fire broke out in a Ramlila pandal at Bharthana town in Etawah, police said.

The incident took place on Monday evening. The fire was caused by a short circuit and reduced the pandal to ashes. However, no one was injured.

According to Kotwali Station House Officer, Mansoor Ahmed, the incident took place when the Ramlila stage was being prepared.

Fortunately, fire tenders rushed to the spot and managed to contain the fire within 20 minutes. No one sustained any major injury in the blaze, the police added.

The pandal was erected on the grounds of a government school. Prima facie, the fire started at the upper part of the pandal, which was being decorated with fancy electrical lights.

Within minutes, the flames spread as the pandal was set up with wooden scaffolds and synthetic cloth.

Following the incident, the staging of Ram Leela was postponed.

The incident comes just a day after a major fire breakout at a Durga Puja pandal in Bhadohi claimed five lives and left 64 others injured.