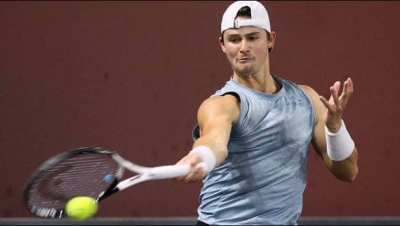 Rising to a career-best No 56 in the ATP Live Rankings, the 23-year-old will play the winner of top seed Felix Auger-Aliassime and third-seeded home favourite Lorenzo Musetti.

“Tomorrow. as I haven’t been in a final before, I’m just going to keep working on the things I’ve been working on and not worry about the result,” Wolf said.

“I definitely had to keep my nerve and wait for my chance. He’s sneaky-aggressive and can turn defense into offense in a second. I’m not sure what to expect,” he added.

Wolf, who upset fourth-seeded countryman Maxime Cressy in the second round and seventh-seed Alexander Bublik in the quarter-finals, improved to 16-16 on the year.

Wolf began the year at No. 174 in the ATP Rankings. He has now climbed more than 100 places this season.