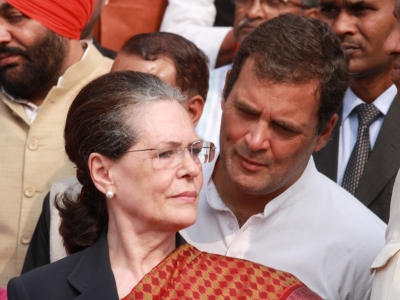 The question — Is India’s grand old party in its last stage? — has been repeatedly raised in the past few years, and the recent episodes are a confirmation of the deep rot that has set within.

The Congress first family has been struggling to keep the party on course, but its repeated electoral losses are making the detractors claim that the Gandhis are losing their grip.

Prior to 2014, the seat of power was South Block, but the centre of power was 10 Janpath. All decisions and movements within and outside the party or the government had links with the Congress President. The defeat in 2014 Lok Sabha polls started the downward slide.

The party has been on a losing spree and even in places where it could form governments, it failed miserably. It entered into alliances, but again failed. The situation is such that other political parties are now wary of forging electoral alliances with the Congress.

The Gandhi siblings have proved to be ineffective and the poll results have only demonstrated their failure to match up to the BJP’s Juggernaut.

The deterioration in the party has reached to such an extent that the high command’s orders are being openly challenged. The revolt in the Congress in Rajasthan was a direct challenge to the party high command, which interim president Sonia Gandhi must have never expected.

Gehlot was one of the Gandhi confidants, who had always bowed at 10 Janpath. So, his dramatic ‘no’ to the party high command’s choice for the presidential polls was a severe jolt.

Sonia Gandhi has already lost some of her close loyalists — Ghulam Nabi Azad, Amarinder Singh, Jyotiraditya Scindia and others. Before leaving, all these three leaders, indirectly or directly, blamed the family for the state the Congress is in. Even as the Rajasthan episode was unravelling, Rahul Gandhi was far away in Kerala on his Bharat Jodo Yatra.

Repeated electoral failures have prompted Rahul Gandhi not to take charge of the party. He was the party president in 2017, but has failed repeatedly to lead the Congress to victory in elections; in fact, the party has never performed as badly as it has done under his leadership.

Rahul is banking on the Bharat Jodo Yatra to reassert himself electorally and politically. The party has repeatedly said that this Yatra will help invigorate party workers and prepare them for the 2024 general elections.

The Yatra has so far not created a buzz nationally, although it has been just got a warm reception in Kanataka. In fact, it has generated more controversies, such as Rahul’s meeting with a controversial pastor, or the violation of forest laws in Karnataka.. His beaming pictures with boys, girls or senior citizens are perhaps no guarantee of these translating into votes. This has been his experience in election after election.

Also in question is the fact that it is not a complete Bharat Jodo Yatra and the itinerary has been unequally distributed. In Kerala, which has 20 Lok Sabha seats, the Yatra stretched for 18 days, but in Uttar Pradesh, which has 80 seats, it will be concluded in just two days. What message does this and the selective omission poll-bound states such as Gujarat and Himachal Pradesh, which are BJP bastions, send to party workers in these places?

Is the party leadership convinced that it cannot take on the BJP individually in these states? Is that the reason why it is focusing on states such as Kerala where the BJP’s presence is minimal and the Congress can deliver a good performance electorally.

Rahul’s Yatra has so far failed to generate the kind of mass interest that the first family of the Congress or party leaders would have wanted to see. And even as the Yatra is going on, the differences within the party are erupting in places such as Rajasthan.

It seemed that Rahul was far removed from the Rajasthan happenings and the crisis, as always, reached the doors of his mother at 10 Janpath.

The interim president, who’s been ailing for some years, had to take the charge yet again, and finally after Gehlot’s ‘no’, she zeroed in upon 80-year-old Mallikarjun Kharge, a tried and tested loyalist and no threat to the family.

When Kharge filed the nomination, all top party leaders trooped in to register their support. The attendance was not only an exhibition of approval for Sonia Gandhi’s loyalist, but also an indication of their solidarity with her decision.

Though Shashi Tharoor, who is from the G23 group, is also contesting the presidential polls, the ‘whip’ clearly is in favour of Kharge. Even the G23 leaders — Anand Sharma, Bhupinder Singh Hooda and other — came out vehemently in favour of Kharge and became his proposers.

The show of solidarity by the Congressmen for Sonia Gandhi’s decision has come at a time when one of her confidants, Ashok Gehlot, defied her. Gehlot was being asked to become the Congress president and give up the office of Chief Minister.

Gehlot did join Kharge when he filed his nomination, trying to show that all is right. But the episode is going to have repercussions in Rajasthan, which will be another test for Sonia and Rahul, and the first test for the new president.

For the new Congress chief, the challenges are Himalayan. He has to resurrect the party, stand up to the BJP, prove that the party is the fulcrum of the opposition, and, above all, maintain the ‘supremacy’ of the Gandhi family.

Given the fact that in the present situation the challenges are near impossible, but one thing that the Congress will exhibit now is that a non-Gandhi can head the party. After the election held after 22 years, the country’s grand old party needs to move out from its dynasty-centric image to a more pluralistic mechanism. Unfortunately, the party will be depending upon 80-year-old Kharge, who doesn’t have a mass following, to do that.