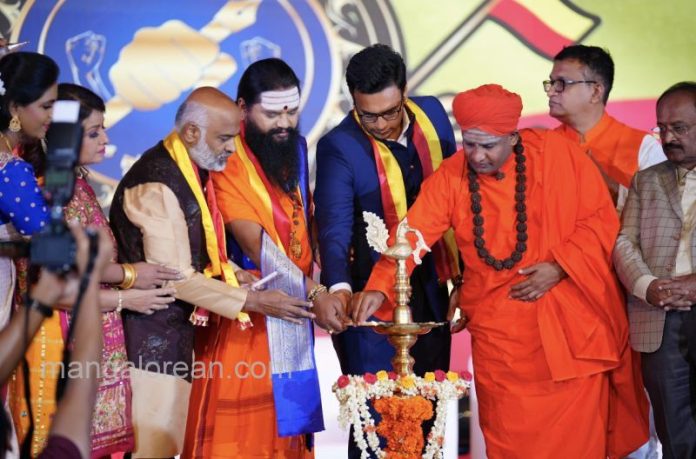 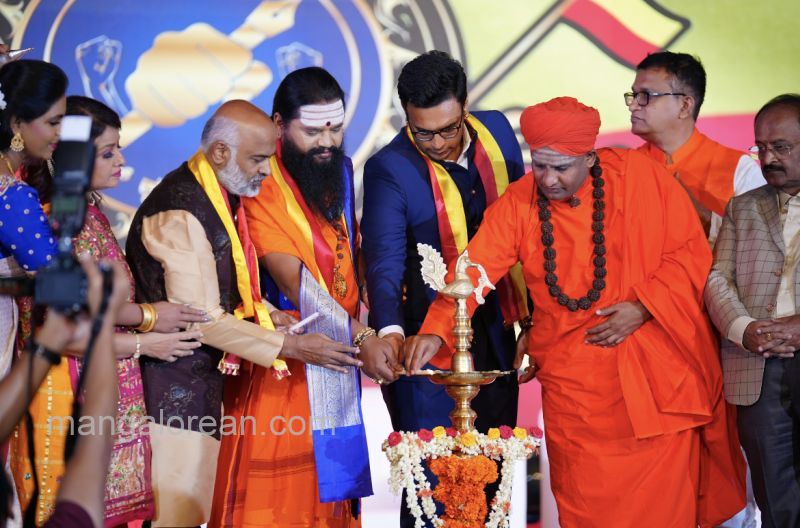 The main organizers of KPCC had a huge team from Karnataka under the leadership of President of KPCC Shivkumar Nagaranavile and the team of Ravisanthu, Prasad Shetty, Mrs Universe Sudha, Pallavi, Paartha and Hemalatha, whereas from Dubai Sadan Das President of Gulf KPCC and Kannadigaru Dubai team, Deepak Somashekar, Vice President Gulf KPCC & Founder of Gulf Movies and Arun Kumar MK President of UAE KPCC and Vice President Kannadigaru Dubai took the lead to coordinate this event with KPCC with a huge local team of 30 volunteers to make this event a grand success. 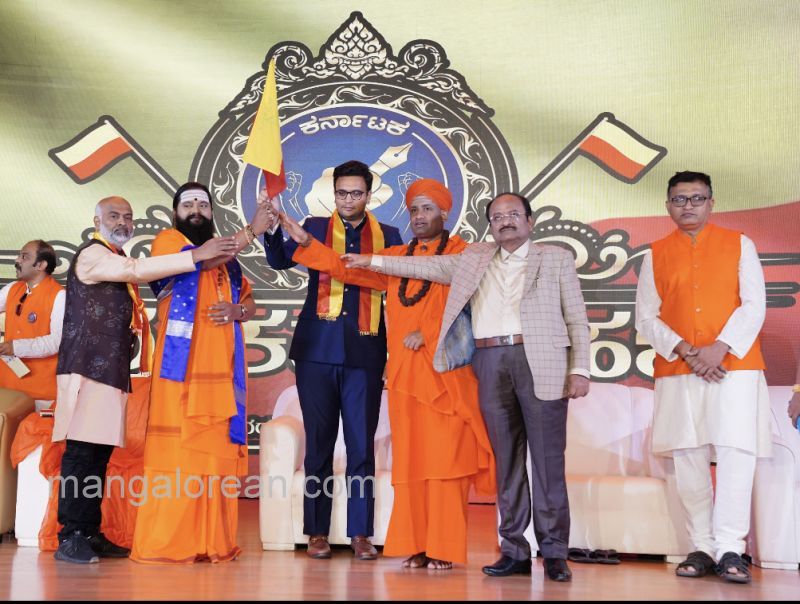 The programme started with the blessing of Shri. Ananda Guruji and Shri. Basava Ramananda Swamy by lighting the lamp at the entrance of the venue decorated with colourful flowers. Welcoming of Shri. Yeduveer Krishnadatta Wadiyar witnessed the grand welcome procession showcasing the culture of Karnataka, many great personalities, Huli Vesha, Huge team of tableaux created a storm of celebration in the Sheikh Rashid auditorium, later as per tradition, the ladies performed Aarathi to Maharaja and flower garland by small children and then the dignitaries were taken to the auditorium with a shower of flower petals.

The stage event started with the UAE national anthem, the Indian National anthem and the Karnataka Naada Geethe followed by the Lamp lighting by all dignitaries. Also, the Indian flag followed by Karnataka Flag was carried to the stage by Kannadigaru Dubai & KPCC volunteers was a memorable moment. Program Anchor was managed by Film star & Celebrity Vijay Raghavendra.

While addressing the huge crowd gathering Shiv Kumar mentioned that he was so fortunate to associate with Kannadigaru Dubai to kick start the 1st “Vishwa Kannada Habba” from Dubai, UAE and this event will ensure to spread our mother tongue, culture and heritage with a strong message to the whole world. Sadan Das also added, that the presence of Shri. Yeduveer Krishnadatta Wadiyar has lighted the atmosphere and it is fortunate for all Kannadigas to have Mysore Maharaja as the Chief guest and the blessing of Shri. Ananda Guruji and Shri. Basava Ramananada Swamy. He mentioned that this was an experimental effort to associate with KPCC and assured all Kannadigas in UAE that Kannadigaru Dubai will ensure to give quality events as it has given for the last 17 years to keep the name of Karnataka sky high. Shri. Yeduveer Krishnadatta Wadiyar while addressing the crowd mentioned the values of Kannada and the demonstration of statehood by all Kannadigas, he appreciated all the organizers for taking such a great step to highlight the name and fame of our motherland always. His Highness Shiekh Majid Rashid Al Mullah applauded Indians / Kannadigas for their enormous service for decades and has built strong bridges between India and UAE. Shri. Ananda Guruji also preached the gathering of peace and gave a message to secure our language and culture through such events. Shri. Basava Ramananda Swamy also chanted a few lines from Basava Vachana and gave the message of lighting lamps to the whole world through good deeds to the human population. 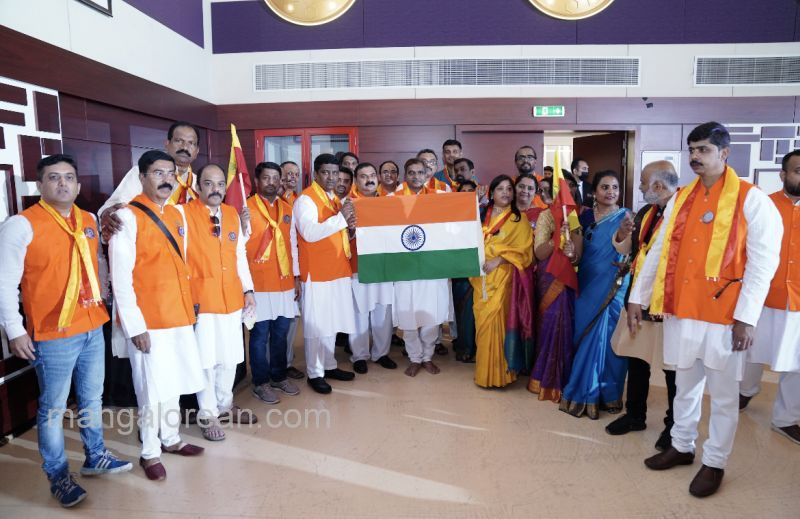 As one of the main agendas of the event, the stage has honoured many dignitaries of Karnataka, UAE from various industries, social workers, achievers in the field of Press world, education, medicine, poets, writers, great stars and artists from Kannada Film industry and felicitated with a ” Vishwa Maanya” Award received by Shri. Yeduveer Krishnadatta Wadiyar. This is a token of great respect to all those who served our motherland. Also, many have received honours from Shri.Yeduveer Wodeyar for their service towards Kannada in UAE for many years. 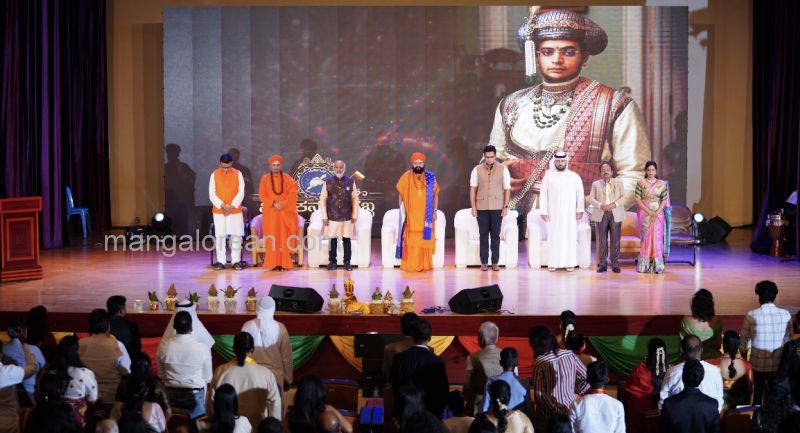 During the Vote of thanks, Shivakumar and Sadan Das invited the entire team of KPCC, Kannadigaru Dubai on stage to thank them for their effort in making the event a grand success to create another milestone/feather to the list of Kannadigaru Dubai who have set many record events for years. They also thanked all the sponsors and all supporters who made this event possible. Shiva Kumar announced that the next Vishwa Kannada Habba -2023 would be conducted in Germany by handing over the responsibility to Vidhushi Smt. Nandhini Narayan, KPCC President for Germany.