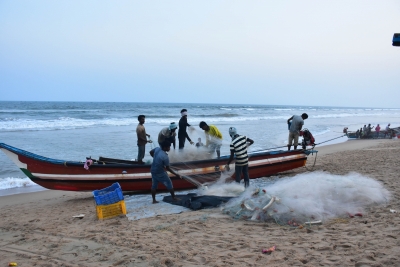 Chennai: Fishermen associations on Monday staged a protest in Rameswaram against the regular attack on their community members and boats by the Sri Lankan Navy.

They demanded urgent action by the Centre and the Tamil Nadu government against the attacks being carried out by the Navy in Palk Strait and in waters close to the International Maritime Boundary Line (IMBL).

R. Sahayam of Xavier Fishermen association of Rameswaram while speaking to mediapersons pointed out, “We are being subjected to regular attacks by the Sri Lankan Navy leading to damage of the boats which end up in huge losses to us.”

He said that the fisherfolk of Rameswaram are scared to venture out into the sea following regular attacks and that this was leading to poverty on the shores. Their leader also called sought the Centre’s intervention in the matter and to ensure that the fishermen are fishing in Palk bay area safely.

Notably, several fishermen were arrested for crossing the IMBL and lodged in Sri Lankan prisons. The mechanised fishing boats that cost more than Rs 1 crore each are confiscated leading to the boats getting destroyed. There were even cases of the Sri Lankan Navy putting advertisements in local newspapers announcing the sale of confiscated fishing vessels.

R. Sahayam, who is also the treasurer of the Rameswaram All Mechanized Fishing boat association, told mediapersons that without immediate intervention from the Union and State government, the fisherfolk will not be able to venture out into the seas. He also said that each boat that is venturing out into the sea has an expenditure anywhere between Rs 35,000 to Rs 75,000 per voyage.

Shanmukhanadhan. S, another fishermen leader, told IANS that the fishermen will have to resort to strong protests including blocking of roads in Rameswaram if there are no interventions.