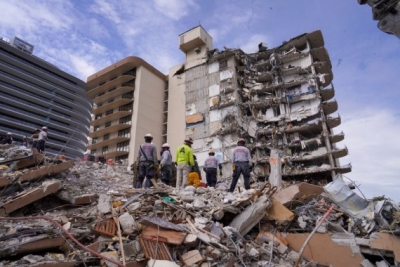 Washington: The death toll from the condo collapse in Surfside, the US state of Florida, has risen to 86, a local official said on Saturday.

Miami-Dade County Mayor Daniella Levine Cava said during a news conference that the death toll from the partial collapse of Champlain Towers South reached 86, of whom 62 have been identified. Sixty-one victims’ next of kin have been notified, and another 43 remained unaccounted for, according to the Mayor.

Local authorities have been working with the US Postal Service in the identification process, including checking the victims’ driver’s license information, Levine Cava said. “We can only truly account for a missing person who is deceased once an identification is made.”

Work at the collapse site has shifted to recovery as rescuers thought it was no longer possible to find people who are still alive more than two weeks after the incident happened, the Xinhua news agency reported.

Levine Cava said that crews paused their work briefly in the morning due to lightening, and that the work will continue through the day despite the rainy weather.

Miami-Dade Fire Rescue Chief Alan Cominsky said he expected the recovery efforts to take another 14 to 21 days before completion.