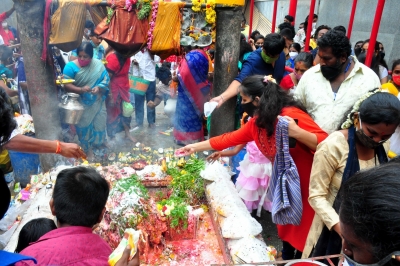 Footfalls in K’taka temples likely increase with Ashadha setting in

Bengaluru: Karnataka administration on Friday reiterated its Covid restrictions, as devotees got ready to begin their ritual on Krishna Paksha (fortnight), Amavasya (no moon day) of Ashadha month, which is the fourth month in a traditional Hindu Kannada calendar followed in the state.

Ashadha Masa (Month) began from July 9 and ends on August 8.

In Karnataka, the Ashadha Month is considered to be inauspicious for performing marriages, house warming ceremony or any other function.

However, it is considered to be very auspicious to perform rituals and worshipping of deities besides organising village fests in the name presiding deities of respective villages.

Therefore, full moon day, no moon day and all four Fridays of this month are considered to be most auspicious to please presiding deities of various temples.

Friday and Saturday, will also mark Amavasya (no moon day). On both of these amavasyas many people who believe in the religion take part in several rituals. Devotees believe that if the rituals are done on these days (no moon day, full moon day and on all four Fridays) the ancestors will be appeased.

However, owing to Covid restrictions, devotees would not be allowed into the famous Hindu temple atop the Chamundi hills in Karnataka’s Mysuru on Fridays of Hindu calendar month ‘Ashadha’, beginning July 9, to prevent crowding.

“As thousands of devotees throng the Chamundeshwari temple atop the hill during the auspicious month of Ashadha, especially on Fridays and the weekends, we have decided to ban their entry to prevent crowding and avoid getting infected by the virus,” Mysuru Deputy Commissioner Bagadi Gautham stated in his order.

Mysuru, the southern state’s cultural capital and popular tourist spot, is about 150 km from Bengaluru.

The Mysuru DC’s order also stated the temple on the city’s outskirts, however, will remain open for devotees from Monday to Thursday, as per the Covid safety protocols. “Devotees must wear mask, maintain physical distance and not bring holy water to sprinkle or offer prasadam to the presiding deity,” said the order.

The temple was re-opened on July 5 after remaining shut for 60 days since April 27 due to the Covid induced lockdown.

The administration has deployed additional police personnel from the foothills to the temple to regulate the movement of devotees and their vehicles.

The Karnataka Hindu Religious Organisations, Temples and Endowments department manages 34,558 temples directly and of these there are around 350 A-grade temples in the state.

Among these, Kukke Subramanya receives the highest footfall as well as revenue. This temple receives the second highest revenue among all the temples in India, after Sri Venkateswara temple at Tirupati.

Barring Saundatti Yellamma temple in Belagavi and Chamunedeswari temple in Mysuru, all other temples are functioning by following Covid safety protocols, an official in the Endowment department said.