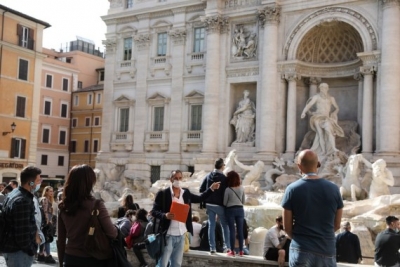 Foreign tourists’ overnight stays in Italy down nearly 55% in 2020

Rome: The final official tally for Italy’s tourism industry during the pandemic year of 2020 is in, and according to the country’s National Statistics Institute(ISTAT), the decline sparked by the coronavirus was “drastic.”

According to data released on Tuesday by the ISTAT, overnight stays of foreign visitors declined by 54.6 per cent last year, Xinhua news agency reported.

Overnight stays of domestic tourists dropped by less, but were still down by 32.2 per cent compared to 2019.

The fall-off in tourism last year was alone responsible for around a quarter of the broad drop in added value in 2020.

The coronavirus pandemic started to have wide impacts on Italian tourism in March 2020, meaning the first two months more or less tracked levels from previous years.

There was also a slight recovery between June and August, when travel restrictions were eased and coronavirus infection rates fell. But the period between March and May and between September and the end of the year was enough to spark what ISTAT called “a drastic drop in tourism spending.”

According to media reports, the sector is recovering in 2021, though it is still falling short of levels from 2019, due in large part to low numbers for arrivals from key markets outside Europe.