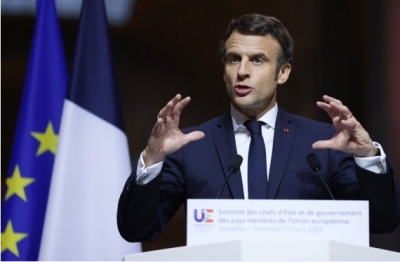 Paris:  France’s President Emmanuel Macron has called on the nation to withstand the different crises that France, Europe and the whole world are going through.

Speaking to French daily news France 2 in an interview entitled “The World in Crises”, Macron said the country’s goal is to restart building nuclear reactors in order to have 45 nuclear reactors in operation by January 2023, compared to 30 out of 56 operational today, Xinhua news agency reported.

He said the country will turn from coal to nuclear and renewable energies, in an effort to tackle climate change.

Speaking of the fuel shortages across France due to strikes at refineries, Macron promised the situation of service stations will return to normal in the coming week.