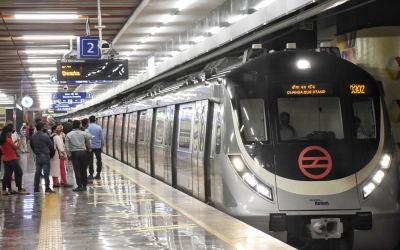 ‘Funds depleted, ops would become standstill’, DMRC to Delhi HC on amount to payable DAMEPL
New Delhi: The Delhi Metro Rail Corporation (DMRC) has told the Delhi High Court that if prayers made by Delhi Airport Metro Express Pvt. Ltd (DAMEPL), are granted then its operations would come to complete standstill, which would be prejudicial to the public interest – considering that approximately 48 lakh journey’s take place daily on the metro system maintained by DMRC in the NCR.

Recently, the DMRC sought a sum of Rs 3,500 crore from the Centre in the form of grant/equity interest free subordinate debt to comply with the high court’s directions in the case of DAMEPL.

In an additional affidavit filed in the high court, DMRC’s general manager, legal, said: “It is respectfully submitted that if any of the prayers as prayed for by the decree holder are granted by this court, at this juncture, the operations of the DMRC would come to complete standstill, which would be prejudicial to the public interest – considering that approximately 48 lakh journey’s take place daily on the metro system maintained by DMRC in the NCR.”

It further added that DMRC has already tendered an amount of approx. Rs 2,600 crore to the decree holder and is expecting funds infusion from its shareholders so as to satisfy the payment of remaining amount of the arbitral award.

The DMRC, in the additional affidavit, added that apart from the running expenditure required for effective operation and maintenance of the assets of DMRC, ensuring the efficient operation of the metro line in NCR, DMRC also requires considerable funds for carrying out regular refurbishment activities of the assets, so as to maintain their useful life cycle as also to replace the said assets such as replacement of signalling old assets; replacement of telecommunication assets/ replacement of worn out rails and turnouts, etc.

“For carrying out the said activities an asset replacement fund was created out of the Operation & Maintenance surplus, over a period of time. However, this fund got completely depleted due to the payment of Rs 2599.17 crore to the Decree Holder, which is likely to jeopardise the safe operations of Metro Services by DMRC,” added the affidavit.

The affidavit said the company wrote letter dated September 22, 2022, to the Union Ministry of Housing and Urban Affairs and to government of NCT of Delhi for infusion of funds in DMRC, so as to enable DMRC to pay of the outstanding amount, payable under arbitral award dated May 11, 2017.

“It is expected that both the governments will respond in terms of their respective liabilities under the Metro Policy, 2017, consequently any further directions in regard to the execution of the award will have to necessarily await the deliberations by both the governments. Endeavour will certainly be made to pursue the subject expeditiously,” said the affidavit.

The Delhi High Court is likely to take up the matter this day in the afternoon.