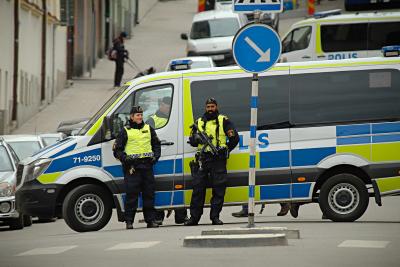 So far this year, 45 shootings have occurred, compared with 73 in the corresponding period in 2020, Xinhua news agency quoted Swedish television SVT as saying in a report on Friday.

Dozens of the top echelons of some of the country’s most violent criminal networks have been arrested as a result of French police decrypting messages on EncroChat, a communications network often used by criminals.

“We have received material and evidence that have enabled us to take those who order the murders and those who control the drug trade to court. It has created confusion and a dampening effect in the criminal environments,” National Police Commissioner Anders Thornberg was quoted by SVT.

In the past week alone, more than 50 suspects have been brought to justice for gang-related crimes in three different cases in Stockholm, Gothenburg and Norrkoping.

Hundreds of suspects are also being investigated for involvement in large-scale drug trade, attacks with explosive devices and planned hits on rivals, said the report.

“We have a window of opportunity now before new players have grown strong enough to challenge,” Thornberg told SVT.

He called for preventing housing communities identified as “vulnerable areas” from returning to a spiral of violence.

“Schools, municipalities and other actors together with the police must exchange situational awareness.

“A lot of good work is already being done, but we need to shift it up so that we can identify the young people who are on their way into crime,” Thornberg said.