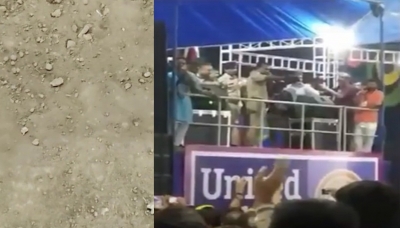 Vadodara: A commercial garba organiser United Way has been dragged to the consumer’s forum here by an advocate over poor facilities on the ground.

The complainant has alleged that even after paying hefty charges for garba passes, pebbles on the ground are making playing garba extremely difficult.

First time in Gujarat’s history a garba organiser has been dragged to the consumer forum.

For the second consecutive night on Tuesday, garba players created a ruckus over the matter and police had to intervene and control the situation. United Way organiser Atul Purohit has promised to return money for which he will share a link with consumers and players through which players can claim their refund.

Vadodara’s advocate Viratsinh Vaghela has filed an application against the United Way under the Consumer protection Act. He feels that the organiser has cheated the players as women have been charged Rs 1,300 for a pass, while the men had to spend Rs 5,000. Vehicle parking is almost one and half kilometer away from the garba ground, for which Rs 50 had to be paid separately. Against such hefty charges the ground is in poor condition, players can’t play garba because of pebbles. He has demanded compensation from the garba organiser.