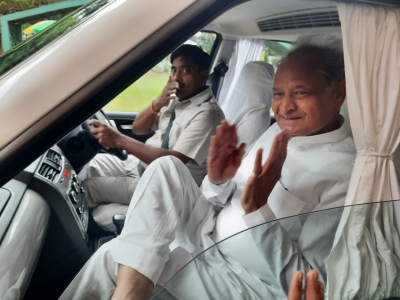 Gehlot may meet Sonia on Thursday to resolve Rajasthan crisis

Jaipur: Rajasthan Chief Minister Ashok Gehlot will meet Congress President Sonia Gandhi on Thursday to end the ongoing political crisis in the state, triggered by the open revolt of MLAs supporting him, as well as to clear the picture on his status – both in the state as well in the party presidential poll, as per Congress sources.

Gehlot was supposed to leave Jaipur for Delhi on Wednesday evening but his plan was postponed and now, there are possibilities of him leaving later. They said that Congress Central Election Authority chief Madhusudan Mistry is not in Delhi on Thursday and hence candidates for presidential post can apply only on the last day of nominations, on September 30.

On the question if Gehlot will file nomination for the post of President, he said that only the Chief Minister and the central leadership are aware of this fact.

Meanwhile, veteran leader Digvijaya Singh’s name has been doing the rounds for the post of President, as he left Bharat Jodo Yatra in between to go to Delhi.

Meanwhile, Congress General Secretary, Organisation, K.C. Venugopal said that the crisis seen in Rajasthan will be resolved in a day or two.

At the same time, Sachin Pilot, who is facing opposition from the Gehlot camp for the post of CM, is already present in Delhi.