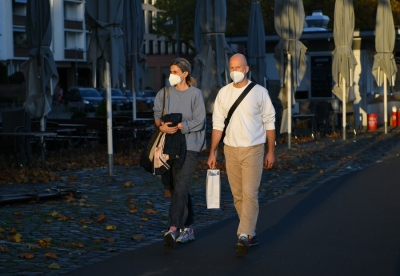 Berlin: The number of COVID-19-related deaths in Germany increased by a record 1,188 in 24 hours, bringing the country’s official death toll to 38,795, the federal government agency for disease control and prevention Robert Koch Institute (RKI) said.

In the previous two days, the daily coronavirus death toll has exceeded 1,000 in the country — 1,019 deaths on Wednesday and 1,070 on Thursday, the RKI said. The previous daily record was 1,129 deaths registered on December 30, 2020, Xinhua news agency reported on Friday.

The number of new daily confirmed COVID-19 cases remained near record levels and increased by 31,849 on Friday, according to the RKI. The cumulative number of confirmed infections has reached 1.87 million in Germany.

German officials repeatedly stress that the interpretation of COVID-19 data remains difficult due to delays in testing and reporting during the year-end holidays. This could lead to an “incomplete picture of the epidemiological situation in Germany of the previous two weeks,” according to the RKI’s latest daily situation report.

Chancellor Angela Merkel and the minister presidents of the federal states have agreed to extend the hard lockdown until at least the end of January and tightened social restrictions to slow the spread of COVID-19 in the country.

Non-essential shops, as well as bars, restaurants and leisure facilities, remain closed. People in Germany are only allowed to meet with one additional person who is not part of the household.

In areas with a 7-day incidence rate exceeding 200 new infections per 100,000 inhabitants, the country’s states are advised to introduce additional local measures, such as restricting the radius of movement to 15 kilometers if no valid reason for travel, such as work, can be provided.

The German government aims to bring the 7-day incidence rate, which stood at 136 on Friday, back down to below 50 per 100,000 inhabitants to prevent the country’s health system from being overburdened.

Germany had launched its vaccination campaign at the end of 2020, with priority given to people aged over 80, people in elderly and care facilities, and frontline health care workers.

As the world is struggling to contain the pandemic, vaccination is underway in Germany and some other countries with the already-authorized coronavirus vaccines.

Meanwhile, 235 candidate vaccines are still being developed worldwide — 63 of them in clinical trials — in countries including Germany, China, Russia, Britain and the United States, according to information released by the World Health Organization on January 6.