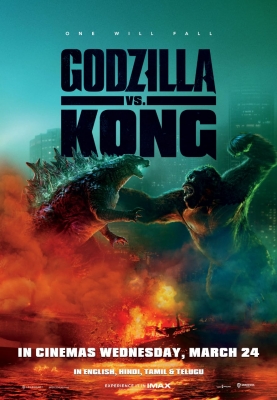 New Delhi: “Godzilla vs. Kong” opened to big box-office numbers on the opening day in India, raking Rs 6.4 crore (nett) on the first day of its release.

“We are absolutely delighted with the opening numbers and the overwhelming response for the film. This proves that movies like Godzilla vs. Kong are best enjoyed by audiences in the biggest cinema screen possible!” says Denzil Dias, VP and MD, Warner Bros. Pictures, India.

Post pandemic, “Godzilla vs Kong” is the first Hollywood film with big opening numbers. Local exhibitors, too are excited about the collections.

“The phenomenal response to this film reinforces the belief that there is tremendous affinity for cinema-going, cutting across gender, boundaries and age-groups. We are thrilled by the overwhelming response and are looking forward to a long run for the film at the box office,” says Kamal Gianchandani, CEO, PVR Pictures.

“The film has performed great on the opening day. It has become the biggest Hollywood opener post covid openings. Many congratulations to team and we look forward to the movie going from strength to strength,” says Devang Sampat, CEO, Cinepolis India.