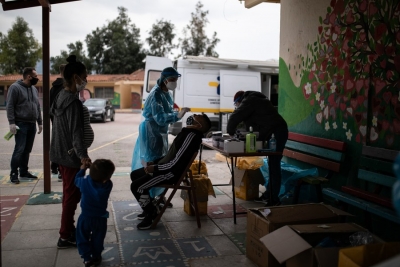 Athens: The Greek government announced the mobilisation of private doctors to support the public healthcare system in the battle against Covid-19.

“Taking into account the emergency conditions and the urgent need for treatment of our fellow citizens, the Health Ministry is proceeding with the requisition of the services of pathologists, pulmonologists and general practitioners in Attica region,” Health minister Vassilis Kikilias said on Monday, Xinhua news agency reported.

The step was taken because the number of doctors who responded positively to appeals made lately to solicit their services was inadequate, according to an e-mailed press release.

About 60 doctors came forward in recent days instead of the 206 needed, sources in the ministry said. The mobilization will last for a month and doctors will get paid for their services.

Despite the hiring of around 10,000 doctors, nurses and other personnel in public hospitals over the past year, there is still need for more helping hands as Greece is facing a third wave of the pandemic, they said, adding that there was no more time available for talks as the country is witnessing a rising number of daily new infections.

“In these difficult times that our country is going through due to the pandemic, we must all do our duty without a second thought and help in any way we can to deal with the health crisis,” Athanasios Exadaktylos, president of the Panhellenic Medical Association, stressed in a press statement following the government’s announcement.

On Sunday, Greece recorded 1,514 new coronavirus infections and 41 deaths in the last 24 hours. A total of 674 patients were on ventilators in hospitals, a new high.

To date, about 1.4 million doses of vaccines have been administered in Greece with some 460,000 people having received both doses, according to the latest official data.

As part of an effort to stem the spread of the virus, Greece has been in a nationwide lockdown since November 7, 2020, which has been eased and tightened in accordance with the course of the pandemic.

On Monday, open-air archaeological sites, including the Acropolis hill in Athens, reopened for the first time since the start of the lockdown. Only a small group of visitors is allowed to visit and the use of protective face masks is obligatory.

In the battle against Covid-19, the contribution of doctors and nurses was overwhelmingly acknowledged by the Greek society.

In a recent opinion poll conducted by ALCO polling firm for TV channel OPEN, 91 per cent of the respondents commended the role of the country’s medical professionals.

Meanwhile, some 67 per cent of the respondents said that Greece should proceed to bilateral agreements with China and Russia to purchase more vaccines.