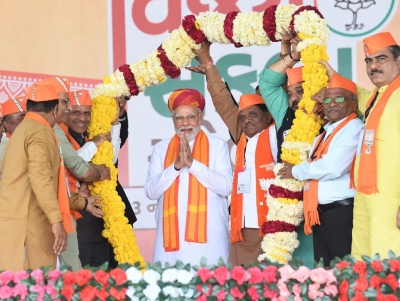 Prime Minister Narendra Modi on Wednesday urged the people of Gujarat to ensure that the BJP wins the state Assembly polls with a huge margin.

Mehsana:  Prime Minister Narendra Modi on Wednesday urged the people of Gujarat to ensure that the BJP wins the state Assembly polls with a huge margin.

Addressing a public rally in Mehsana, he said, “I am confident that you will vote for us but this time, you should not just vote for victory, but for victory with a huge margin.”

Coming down heavily on the Congress, he said when the grand-old-party was in power 20 years ago, the state had only 55 lakh power connections and when the farmers protested for more, they had to face bullets.

Notably, during the Congress rule in the late 1980s, when the farmers were blocking highways under the Bharatiya Kisan Sangh demanding more electricity, the police had to open fire on them at various places, in which 15 farmers were killed.

Comparing the situations, he said now power connections in the state have increased to 2 crore.

He also reminded that back then, only 2000 MW power was generated using gas, today the state is generating 4000 MW. Once the Mehsana and north Gujarat were facing acute shortage for water — both drinking and irrigation, but since the BJP government has provided Narmada, Sujalam and Sufalam irrigation projects, farmers are able to engage in cultivation in all the three seasons.

Mehsana and Becharaji, he said, have turned into industrial hubs, Suzuki cars manufactured in Becharaji are being exported to Japan. There were 600 engineering units in Mehsana which has gone upto 2000. Soon electric vehicles (EV) will be manufactured here making it an EV hub, the Prime Minister said.

The BJP government has done so much developmental work that the Congress can’t find a single issue against it and hence is not in a position to question the ruling party.

The Gujarat Assembly polls are scheduled to be held in two phases on December 1 and 5. The results will be announced on December 8.