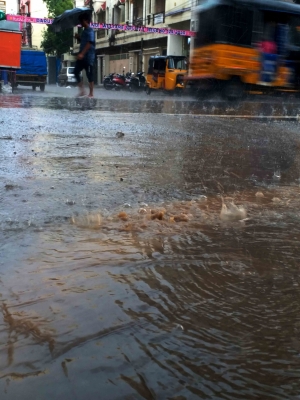 Gurugram gearing up to tackle waterlogging ahead of monsoon

Gurugram:  The district administration of Gurugram will soon fix the responsibilities of the Haryana Civil Services (HCS) rank officials to deal with the problem of waterlogging in different areas of the city.

The officials will be allocated separate areas to deal with the issue of waterlogging. This decision was taken by Deputy Commissioner Yash Garg during a meeting here on Thursday.

Garg has directed the officials of the Municipal Corporation of Gurugram (MCG) and Gurugram Metropolitan Development Authority (GMDA) — the two agencies dealing with the waterlogging issues in Gurugram to put all efforts and arrangements ahead of monsoon season.

He sought several information from the officials of these two agencies, including the number of pump sets used in the affiliated water prone areas in their jurisdiction and workers deployed on the critical points.

“The concerned officer will ensure that ahead of the rainy season, work starts on the critical point and install water pump. Along with this, the Control Room-18001801817 and 0124-475355 have also been set up to resolve waterlogging problems by the GMDA,” Garg said.