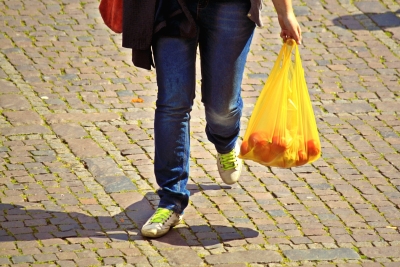 Gurugram: In a first of its kind of initiative, the Municipal Corporation of Gurugram (MCG), is set to declare the Sector-23 market in Gorai a polythene-free zone by January 2021.

For this, the civic body has already deputed its staff in the market to keep a constant vigil.

The market has nearly 130 shops and more than 50 street vendors, who produce 45kg of plastic waste and polythene everyday, said the MCG officials.

“We all know that plastic is harmful for us and our family but why we still use it. If we continue to use it for our own convenience, then it can be difficult for the next generation to breathe. We should stop using plastic from today itself,” said Dheeraj Kumar, Joint Commissioner, Swachh Bharat Mission, MCG.

Cleanliness cannot be achieved only on behalf of the government, the Joint Commissioner added.

“It is very important to have citizens’ participation in it. The city residents should consider it as their moral responsibility and consider Gurugram city as their home and contribute in making it clean. They must stop using single-use plastic and polyethylene. Keep wet, dry and household waste in your house separately,” Kumar said.

For this initiative, the MCG has distributed more than 9,000 cloth bags in the market, these bags were prepared at recently opened cloth bag bank.

The corporation officials said footfall of the visitors at the market is high as it is located just near the Delhi-Gurugram border. The market has restaurants, eateries, jewellers, electronic, clothing, daily need shops, among others.

Apart from people living in Sector-23, residents from Palam Vihar, Dundahera village, Sector-18, Udyog Vihar and Bijwasan in Delhi are also frequent visitors to the market.

“We would set an example by making this market the first polythene-free market in Gurugram. Most of the shopkeepers in the market have stopped using polythene and soon it will become the first polyethylene-free market,” said Kuldeep Singh, Cleanliness Brand Ambassador of MCG.