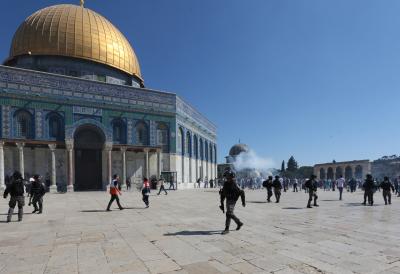 Gaza: Hundreds of Palestinians rallied in Gaza City to protest against Israeli raids on the Al-Aqsa Mosque.

The rally was organized on Saturday by the Palestinian Islamic Resistance Movement (Hamas) at Palestine Stadium in northwestern Gaza city under the title “Al-Aqsa Mosque is in danger”. The protesters include Hamas leaders and supporters as well as representatives of Palestinian factions, Xinhua news agency reported.

Protesters chanted anti-Israel slogans and slogans in support of the Al-Aqsa Mosque. They waved Palestinian flags and Hamas green flags, as well as pictures and models of Al-Aqsa Mosque.

Yahya Sinwar, Hamas’ top leader in the Gaza Strip who participated the rally, warned that the current Israeli practices at the mosque in Jerusalem “would blow up the situation and lead to an unexpected tension.”

“The Palestinians in Gaza gathered to deliver a message that the occupation of Al-Aqsa, Jerusalem, the West Bank, and Palestine in general, would lead to an explosion that no one will be able to control,” Rawhi Mushtaha, a member of Hamas political bureau, told the rally.

The rally came less than a week after the Israeli police reportedly broke into the holy site on September 26 in the Old City of Jerusalem to remove Muslim worshippers and provide a safe ground for ultranationalist Jews marking the Jewish New Year (from September 25 to 27).