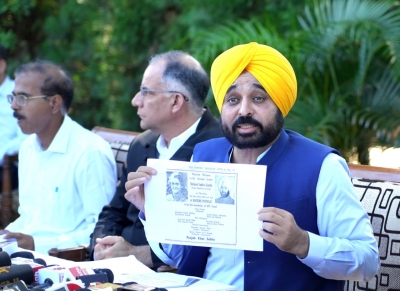 Haryana for starting SYL canal construction, Punjab says not even drop of water to share

After the two-hour long meeting, Khattar told the media that as directed by the Supreme Court, the meeting was held with the Punjab Chief Minister but both States reached no consensus on the construction of the SYL canal.

Outrightly rejecting Haryana government’s proposal to start construction of the SYL canal, Mann categorically told the media that there “is no question of initiating this work, as the state does not have even a single drop of water to share with Haryana”.

“At the time when agreement for the canal was inked, Punjab was getting 18.56 million acre feet (MAF) of water which has been now reduced to 12.63 MAF. At present, we don’t have any surplus water to share with any state,” he said, while interacting with the media separately.

Khattar said the Supreme Court has asked for the construction of the SYL canal, with which Punjab has disagreed. “The construction of SYL is the lifeline for Haryana,” said the Chief Minister adding that now he will meet Union Jal Shakti Minister Gajendra Singh Shekhawat to brief him about this meeting.

He said earlier also a tribunal was formed to resolve the water issue, after that a new tribunal of three judges was again formed and as per the tribunal’s decision, the construction of the SYL canal is necessary.

Justifying his decision not share even a drop of water with Haryana, Mann said Haryana is currently getting 14.10 MAF of water from the Satluj, Yamuna and other rivulets whereas Punjab is getting only 12.63 MAF.

He said despite being smaller in area, Haryana is getting more water than Punjab and ironically it is demanding more water at the cost of Punjab.

In wake of this fact, Mann said how can “we give water to Haryana if our own fields are starving for it”.

The Chief Minister said 1,400 km of rivers, canals and rivulets have dried up in the state due to which pressure had increased on groundwater. He said currently 27 per cent of Punjab’s agriculture is dependent on surface water whereas the remaining 73 per cent is being done through using the groundwater.

Mann said this has resulted in depletion of groundwater level in the state and most of the blocks have gone into dark zones.

The Chief Minister said instead of seeking water from Punjab, Haryana should give water to the state from the Yamuna river.

He further said that if Haryana really needs water, then he is ready to go with his Haryana counterpart to Prime Minister Narendra Modi for solving the issue.

However, he said before the Prime Minister the state government will reiterate its stand that Punjab does not even have a single drop of water to share with Haryana.

Mann said rather Punjab and Haryana should forcefully plead the case of water sharing from Ganga and Yamuna before the Prime Minister.