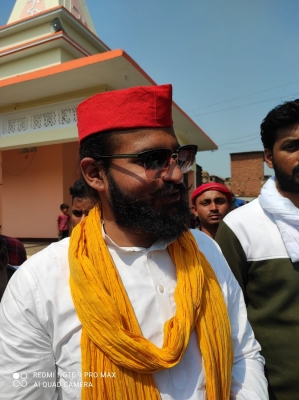 Abbas Ansari, son of mafia don Mukhtar Ansari, reached the court with an advocate by dodging the police team.

He surrendered in the court of MP / MLA in the hate-speech case. The police had been looking for him but had failed to arrest him.

On Wednesday, Abbas Ansari got interim relief from the Supreme Court in the Arms Act case. Along with this, the Uttar Pradesh government was directed not to take any preventive action against Abbas till further orders.

On the petition of Abbas Ansari, the Supreme Court issued a notice to the UP government and sought its response.

The ACJM MP-MLA court had issued a non-bailable warrant against MLA Ansari and his brother Umar Ansari.

Abbas had allegedly threatened state government officials from a public meeting stage in the Pahadpur area of Mau on March 3 night.

He had said, “After the formation of Samajwadi Party (SP)-led government, officials would have to give account of their work in the past regime before getting transferred.”

After the video of the speech went viral on social media, Mau police, on March 4, booked him in a case under section 171F (offence of undue influence or personation at an election) and 506 (criminal intimidation) of IPC.