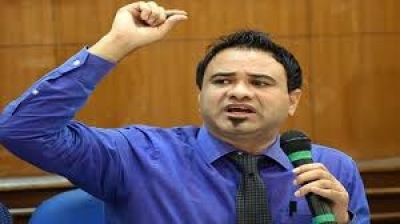 HC asks UP govt to respond to Kafeel Khan’s plea

Prayagraj (Uttar Pradesh):  The Allahabad High Court has directed the Yogi Adityanath government counsel to seek instructions from the concerned authorities, regarding a petition moved by Dr. Kafeel Khan, a pediatrician, seeking to quash the charge sheet and criminal case filed against him for his alleged inflammatory speech delivered at the Aligarh Muslim University (AMU) during anti-CAA protests in December 2019.

Justice J. J. Munir has fixed next hearing for April 6.

In the petition filed under Section 482 (saving of inherent powers of high court) of Criminal Procedure Code (CrPC), Khan had challenged the order passed by the chief judicial magistrate of Aligarh taking cognizance of the charge sheet for the alleged offences under sections 153-A (promoting enmity between different groups on grounds of religion, race, place of birth, residence, language, etc., and doing acts prejudicial to maintenance of harmony), 153-B (imputations, assertions prejudicial to national-integration) and 505 (2) (statements creating or promoting enmity, hatred or ill will between classes) of the Indian Penal Code (IPC).

In December 2019, Khan had addressed a rally at the AMU which was organised in protest against the Citizenship (Amendment) Act, 2019.

An FIR was lodged against him in this connection at the Aligarh police station.

Later, the police investigated the matter and submitted a charge sheet against him.

In the petition, the counsel for Khan has taken the plea that the police, while lodging the FIR and charge sheet against him, have not followed proper legal procedures.

It was contended that order of taking cognizance for the above mentioned offences without prior sanction from the Central or state government is without jurisdiction and is null in law.

Further, the entire speech does not disclose hate speech and no ingredients are available to attract sections under which FIR was lodged against him.

On February 13, 2020, Khan was booked under the National Security Act (NSA) alleging that he delivered the inflammatory speech in AMU during anti-CAA protests.

On September 1, 2020, the Allahabad high court had set aside the detention of Khan under the NSA and had directed the state government to immediately release him.

In this decision, the high court had observed, “Dr Kafeel Khan’s speech does not promote hatred or violence, it gives a call for national integrity and unity among citizens.”

However, the decision of the High Court dated September 1, 2020 was challenged before the apex court by the state government but the apex court refused to interfere in the matter.

Khan made headlines after the 2017 oxygen tragedy at the BRD Medical College in which several kids had died allegedly due to lack of oxygen cylinders. While initially he was hailed as a saviour of children for arranging emergency oxygen cylinders, he was later booked as one of the nine accused in the case.