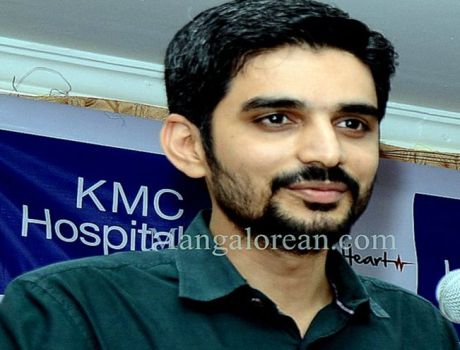 Mangalore: Yes, today 29 September is World Heart Day, which was founded in 2000 to inform people around the globe that heart disease and stroke are the world’s leading causes of death, claiming 17.3 million lives each year, of which 80% of deaths occur in low and middle-income countries, including India. World Heart Day is an annual event and each year’s celebrations have a different theme, reflecting key issues and topics relating to heart health. 2014’s theme is creating heart-healthy environments.

World Heart Day spreads the news that at least 80% of premature deaths from cardiovascular disease (CVD) could be avoided if four main risk factors – tobacco use, unhealthy diet, physical inactivity and harmful use of alcohol – are controlled. The success of World Heart Day depends on the pro-activity of organizations from around the world to help spread awareness of CVD, the world’s number one killer.

So this WHD, let’s create a heart-healthy environment by listening to your heart. The main reason for a heart’s failure is not listening to it, eating unhealthily and leading an inactive or stressful lifestyle. The commonest reasons for heart disease are high cholesterol and triglycerides, high blood sugar levels or diabetes, inactive lifestyle or lack of physical exercise, excess body weight or obesity and anxiety, anger and stress. With all this pressure on it, the heart’s pumping action slowly becomes weaker. Regular exercise is a must, and you should also correct your diet.

Sources reveal that food is one of the biggest and the most direct contributors to any heart disease. High cholesterol, blocked arteries, hypertension, palpitations, arrhythmia- all have their roots in the food we eat. Unhealthy eating habits can lead to various heart problems. Apart from your diet, exercise plays a major role in cardiovascular health. Like any other muscle in our body, the heart is also a muscle that needs some physical activity to remain in good shape. Regular exercise burns calories, lowers bad cholesterol, and boosts good cholesterol. It’s never too late to start. If you don’t enjoy going to the gym or playing a sport-even a brisk walk for 30 minutes a day can make a difference.

During the KMC Heart Day Run I had the privilege to meet one of the young, intellectual and dynamic Cardiac Electrophysiologist of KMC Hospital (Ambedkar Circle/jyothi) Dr Maneesh Rai, who readily agreed to spare his time in giving some information in how you can prevent heart diseases. “Rhythm disorders constitute a significant portion of cardiac abnormalities that is often underrepresented because of a general lack of awareness among the public. For heart to function normally, not only is an intact blood supply (normal blood vessels) essential but also an intact electrical system mandatory” said Dr Maneesh Rai, who is the only second Cardiac electrophysiologist in the Karnataka state.

The practice of electrophysiology is fantastic, alive, and ever changing; I hope this article helps provide perspective as you start your career. Electrophysiology is the fastest-growing sub-specialty within cardiology, and Dr Maneesh is very proud of his profession and the work he is doing at KMC hospital treating and caring for patients with heart diseases. “If you have an irregular heartbeat, you may need to see more than just your cardiologist. Another doctor, an electrophysiologist, can diagnose and help treat arrhythmia. Your heart has two basic functions. One is to pump blood throughout your body, and the other is to remember to pump blood throughout your body” explains Dr Rai.

Pumping blood is essentially a plumbing system, and the way the heart remembers to pump blood is electrical. People can have medical issues with one or both systems. Cardiologists focus on the heart’s plumbing system. They deal with diseases of the cardiovascular system, the heart, and blood vessels, and focus on preventing and treating heart disease and heart attacks. You go to this heart doctor for cardiac tests such as stress tests and echocardiograms and if you need an angiogram or angioplasty.

When Do You Need An Electrophysiologist? In a normal, healthy heart, the upper chambers (the atria) and lower chambers (the ventricles) work together, alternately contracting and relaxing to pump blood. Sometimes the rhythm is thrown off and you have an irregular heartbeat — one that’s too fast (more than 100 beats per minute) or too slow (fewer than 60 beats per minute). An electrophysiologist can help you deal with an arrhythmia, the most common being atrial fibrillation, where the two upper chambers quiver rather than coordinate their contractions.

One of the causes of arrhythmia is an injury from a heart attack. Others include recovering from heart surgery, coronary artery disease, valve disorders, an imbalance of sodium or potassium, and stress. An electrophysiologist may order a number of different tests to confirm you have an arrhythmia and to determine its cause. Your arrhythmia may be treated with lifestyle changes, medications, and invasive therapies if necessary.

If medications and lifestyle changes don’t help, an electrophysiologist might perform an ablation to disconnect the electrical pathways that aren’t working properly. This heart doctor can also perform other surgical operations such as implanting a pacemaker or defibrillator. Two surgeries sometimes used to correct atrial fibrillation are the Maze and modified Maze procedures. These require the surgeon to cut a pattern in your upper heart chambers, like a maze, and then stitch up the cuts to create scars. Scars interfere with the stray electrical impulses that cause atrial fibrillation.

You and an electrophysiologist will discuss the options and determine the best treatment for you. “Electrophysiologists are more than just physicians who see patients. We work to understand the disease and develop new therapies. We have lots of tools that we can use to help people with irregular heartbeats manage their condition, and we work as a team to provide the best care possible.” says Dr Maneesh Rai.

Born in Mangalore on April 1, 1982 Dr. Maneesh Rai K did his MBBS at Kasturba Medical College-Mangalore and Mahe University-Manipal in 2006. After completing my second-year pre-university course in the prestigious St. Aloysius College Mangalore, Maneesh joined Kasturba Medical College, Mangalore for M.B.B.S course. During the five and half years of M.B.B.S training, he had secured gold medals in the subjects of Pathology, ENT and Surgery. He was also awarded the ‘T.M.A PAI (founder of Kasturba Medical College ) blue ribbon award for the BEST OUTGOING M.B.B.S STUDENT’ for securing the highest collective number of marks in all the subjects throughout the M.B.B.S course.

After completing his internship, Maneesh joined Jawaharlal Institute Of Postgraduate Medical Education and Research ( JIPMER), an Institute of National Importance, for his three-year training in General Medicine. He secured gold medal in General Medicine and was also awarded the ‘Best Thesis’ award for his dissertation on “Co-morbidities and Outcome Study in Diabetic Foot” by the JIPMER University.

Married to Dr Chaitra, he is a proud father of a cute little one year nine months old son Siddarth Rai. Dr Maneesh’s parents are Dr Mahabala Rai and Mallika Rai, and has two brothers- Dr Mayur Rai- an Orthopaedic Surgeon, and Mithun Rai- who is Youth Congress president of DK.

Following are the excerpts from the exclusive interview with Dr Maneesh Rai:

Q: What made you come back to KMC?
Being a Mangalorean I always wanted to come back to Mangalore after my studies and couldn’t ask for a better place to start my journey than my Alma mater KMC.

To become an electrophysiologist, after MBBS one has to complete post graduation in general medicine (3 years) and then Doctorate in Cardiology (DM/DNB for 3 years) after which he/she has to undergo specialized training in electrophysiology ( fellowship) the duration of which is usually between 1-2 years. In India, Rajiv Gandhi University of Health Sciences, Karnataka offers the only university recognized fellowship in electrophysiology which is of 1 ½ years duration.

Q: What are the benefits of electrophysiology treatment for a patient ailing with heart problems?
Electrophysiology caters to people with rhythm disturbances and heart failure. For patients with slow heart rates, we insert artificial ‘Pacemakers” beneath the skin of the collar bone which takes over the electrical function of the heart. These pacemakers last for 8-10 years after which the battery needs to be changed. Pacemakers male a huge difference to people who are symptomatic because of slow heart rates in whom left untreated it is life threatening.

Those with episodes of very rapid heart rates suffer from additional circuits within the heart many rhythms of which are completely curable through a small procedure that is performed under local anesthesia called Radio Frequency Ablation. Once treated, these circuits rarely grow back and the patient is more or less cured for life.

Q: What kind of procedures are used during electrophysiology treatment?
As I said earlier, for asymptomatic slowing of the heart rate we insert pacemakers through a minor surgical procedure under local anesthesia which usually lasts for one hour. For additional circuits in the heart we perform RF Ablation which is a procedure similar to an angiogram wherein through the groin we pass specialized wires that record electrical signals into the heart, induce the arrhythmia, search for the additional circuits and then close it down with radio frequency energy. The Whole procedure is performed under local anesthesia and lasts for nearly an hour.

Q: Can anyone control and prevent heart disease?
Definitely. The most common form of heart disease called the coronary artery disease is a lifestyle disease. Smoking, unhealthy diet that is rich in saturated fats, physical inactivity and too much of alcohol are risk factors for heart attacks. By quitting smoking, remaining active and by eating healthy (lots of fruits and vegetables) one can remain healthy and try and prevent heart disease.

Q: Do you have any advice for medical students who may be interested in becoming a cardiologist and/or electrophysiologist?
Determination, dedication, and devotion. It’s a long journey!

Q: What is your message to readers of mangalorean.com to stay healthy and avoid getting heart diseases?
Don’t smoke. If you do, quit today because 95% of all heart attacks in young people is due to smoking. Eat healthily, remain active and stay healthy!