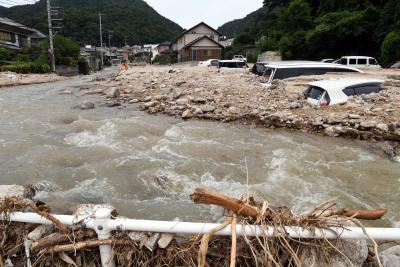 Tokyo: Heavy rains were forecasted to lash the Sea of Japan coast on Wednesday and Thursday, prompting authorities to issue a warning for flood and landslide.

The Lu River in Matsue city, the prefectural capital of Shimane, reached the flood risk level.

The two prefectures ordered evacuation for around 310,000 and 19,000 residents, respectively.

The municipal governments have received reports of damage due to landslide and flooding at multiple locations in Matsue and Izumo, both in Shimane.

The national weather agency said 75 mm of rainfall were logged in one hour in Izumo on Wednesday.

The city government of Matsue postponed Covid-19 vaccinations for about 200 elderly people originally planned for the day due to the heavy rain.

In Shizuoka prefecture, it has been observed that rains have loosened the surface ground in some places on the Pacific coast, and increased the risk of disasters similar to a large mudslide that took place there last week.

The death toll from the mudslide in Atami city in Shizuoka increased to seven, while 27 remain missing.