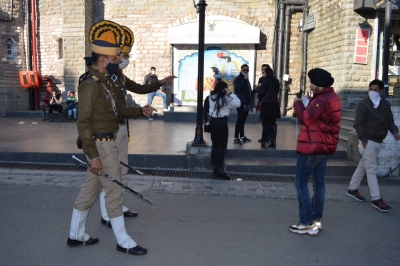 ArrayShimla: Himachal Pradesh’s popular tourist resorts like Narkanda, Manali and Dalhousie are still wrapped up in a blanket of white, with this week’s snowfall turning most of the hill stations more picturesque and chock-a-block with New Year’s Eve revellers.

However, the Met Office in Shimla on Wednesday predicted the sun will shine across the state till January 3 with chances of snow at some places thereafter.

But the current minimum temperature in most of the places stayed close to sub-zero.

Narkanda, the heart of the apple belt some 65km from the state capital, and the popular tourist resorts Manali and Dalhousie have plenty of snow cover.

“Most of the hotels in Manali and its nearby places have been sold out till January 6,” Anoop Thakur, Manali Hoteliers Association President, told IANS.

Snow is the main attraction for the tourists. “Manali has a plenty of snow where the tourists are enjoying hurling snowball at one another,” he said.

According to Thakur, no less than 1,500 hotels, lodges and home-stay accommodations in and around Manali had witnessed a downturn since the coronavirus pandemic hit in the late March.

“Most of the hoteliers are back to business after a long break when the arrival of tourists had almost stopped and hotel bookings vanished as states closed their borders and imposed lockdowns,” he added.

Himachal Pradesh is a major tourism destination. The contribution of the tourism sector to the state GDP is about seven per cent, a significant one.

Shimla, known for the imperial grandeur of buildings that were once institutions of power when it was the summer capital of British India, saw season’s first snow this week. However, it largely melted the same day.

Hoteliers in Shimla say it is not just snow but also the sun that is attracting the tourists.

“In winter when the sun is rarely visible owing to fog in the plains, the hills are the preferred destination for the tourists owing to long sunny days,” Tourism Industry Stakeholders Association President and Shimla-based hotelier Mohinder Seth told IANS.

Tour operators in Shimla have been advising tourists to plan trips to Kufri and Narkanda to enjoy the snow-laden hills.

The mountain peaks viewed from Shimla, and the Dhauladhar peaks overlooking Tibetan Buddhist leader Dalai Lama’s official palace in McLeodganj near Dharamsala are covered by a white blanket.

Riya Chadha, a senior executive with a Chandigarh-based multinational company, said: “It is really pleasant to enjoy long hours of mellow sunshine in Shimla.”

Her husband Nikhil added: “We came here on Christmas. We enjoyed snowfall on December 28. After that we are basking in the sunshine.”

According to the Met office, it was 2002 when it snowed in Shimla last time on New Year’s Eve.

But a word of caution for the holidaymakers.

The state police have warned that its force will be strictly enforcing Covid-19 related health protocols.

“Like Christmas festivity, the police welcome all tourists for New Year but they are strictly advised to wear masks and practice social distancing guidelines,” an official statement said.

The state’s economy is highly dependent on tourism, besides hydroelectric power and horticulture.